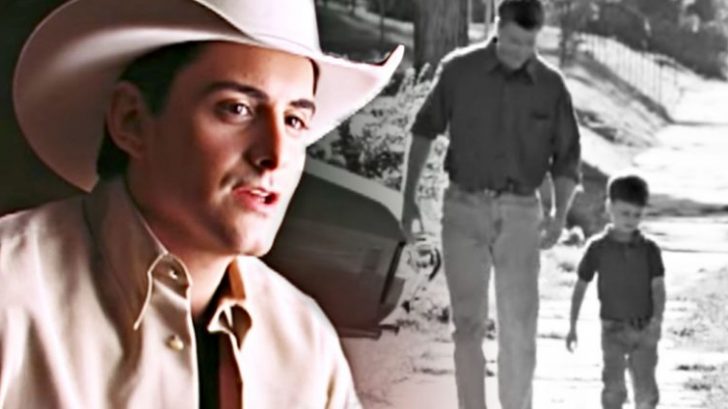 Praising the incredible character of a man who stepped up and became a perfect role model and father figure to the child of a woman he was dating, Brad Paisley brought audiences to tears with his second single to ever be released.

According to his co-writer on the track, Kelley Lovelace, Paisley sat down with him to write a song about Lovelace’s own experience as a stepfather and was quoted as saying, “Let’s make a song about you two that will make your wife cry.”

The song, “He Didn’t Have To Be” is a tribute to amazing stepfathers everywhere and tells the story of a man who found out that the woman he was dating had a son at home. When he discovered this, he began to include the son in the time that they spent together, taking him to movies and on various outings with his mom.

18 Years Ago: Brad Paisley Scores First No. 1 Hit With 'He Didn't Have to Be' https://t.co/ceMUb3VWC4 pic.twitter.com/cEjDYqdRMQ

As the story progresses, the newly found father-figure proposes to the young child’s mother and becomes his stepfather, joining the family and taking on the role of Dad when, like the song says, ‘he didn’t have to be’. Coming full circle, the track moves into the son’s own experience of welcoming a child into the world with his wife and hoping that he could be as great of a father to his own children as his stepdad was to him.

His second single released to country radio, Paisley’s “He Didn’t Have To Be” soared to the No. 1 position on Billboard’s U.S. Hot Country Songs chart and held the spot for a week.

Watch this heart-melting tribute to an amazing father figure below, but keep the tissues handy!