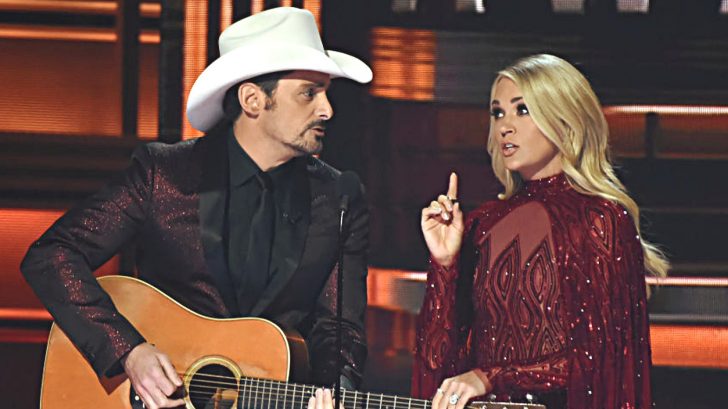 After suffering a fall at her Nashville home in November, Carrie Underwood was left with a wrist that required surgery and cuts on her face that took 40-50 stitches. Underwood wrote about her facial injuries in an end of the year letter to her fan club, saying it may be a while before she was comfortable showing her face again.

She continued to keep fans updated as she healed in private. Every now and then, she’d share an image that would show a small portion of her face, leaving fans curious as to just how bad her scars were.

Finally, Underwood started showing more of her face in April, making fans wonder if something big was coming up. Sure enough, Underwood surprised everyone when she announced the release of a new single, “Cry Pretty.”

Days later, she made her first public appearance since her fall when she performed “Cry Pretty” at the ACM Awards.

Underwood’s ACM performance was hailed as one of the best of the night. She appeared visibly emotional as she soaked in the cheers and applause she received during her standing ovation, which was the longest of the night.

Her performance generated many compliments from her fellow artists, including Miranda Lambert and Reba McEntire. McEntire became one of the first artists to speak specifically about Underwood’s fall, saying that she was “very proud” of the strength she showcased during her ACM performance.

But other than that, few artists have said much about Underwood’s fall, until now.

Out of all country artists, it only seemed logical that Brad Paisley would be one of the first artists to say something about Underwood’s fall. After all, not only are he and Underwood past collaborators and good friends, but the two have hosted the CMA Awards together for a decade.

Of course, there’s no telling if Paisley said something to Underwood in private before this point. But on Monday (May 14), Paisley finally spoke publicly about his beloved friend’s fall during an interview with CMT’s Cody Alan.

First and foremost, he echoed the sentiments that McEntire expressed after the ACM Awards, saying he has been “watching with incredible respect and awe about how she’s handled all this.”

He Knows It Hasn’t Been Easy…

Paisley noted how he’s sure it hasn’t been easy for Underwood to deal with the aftermath of her fall in this day in age. With the world being so “cynical,” he says that she deserves a lot of credit for taking her experience and using it to inspire others:

“It’s a moment in time in our nation and in our world where women are dealing with some of these things, and here’s someone not afraid to say, ‘Okay—look. I know what I’ve been through is something that can inspire others who have similar situations or wonder about how they look.'”

Once again, just like McEntire, Paisley said that he is “very proud” of the way that Underwood has handled everything. It must be nice for her to have such a supportive friend!

Paisley and Underwood have always been there for each other, and they’ve made some pretty good music together too. Relive their gorgeous duet “Remind Me” by watching the video below.