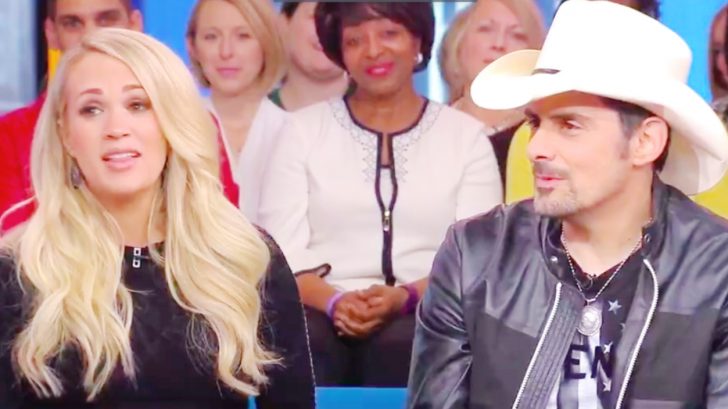 On August 8, Carrie Underwood had a bundle of news to share with her fans in a special video announcement. First, she revealed her plans to embark on tour in May 2019 in support of her new album, Cry Pretty.

Of course, she knew that fans would be wondering why she chose to start the tour so late. She had a good explanation!

Slowly, the camera panned away to reveal lettered balloons above Carrie’s head that spelled out the word “Baby.” That’s when Carrie revealed that she and husband Mike Fisher are expecting their second child, saying, “Mike and Isaiah and I are absolutely over the moon and excited to be adding another little fish to our pond!”

When Is She Due? No One Knows…

Since then, there’s been much speculation over what gender the baby is. From the get-go, fans suspected that she’s having a girl, since she wore a pink jacket in her pregnancy announcement.

Though Carrie made it clear that at that time, she didn’t know whether she was having a boy or a girl. She learned a while later, but has still remained mum when asked about the topic.

Even Ellen DeGeneres couldn’t get Carrie to crack and reveal the gender of her second child.

Fans have also tried to calculate when Carrie is due, since she hasn’t revealed that bit of information either. Based on the timing of her announcement and the kickoff of her tour, fans have guessed that she may be due some time in January.

Brad Paisley Is Ready For This Baby To Be Here

Finally, we got our first hint about Carrie’s due date, though it didn’t come from her or Mike. It actually came from her CMA Awards co-host, Brad Paisley.

THIS FRIDAY, FIRST on @GMA and then on #GMADay with @sarahaines & @michaelstrahan: @CountryMusic superstars @carrieunderwood & @BradPaisley!

They're hosting the 2018 #CMAawards — but first catch them here in Times Square! pic.twitter.com/X33OLb9niy

Carrie and Brad are set to host the awards for the 11th time this year, and Brad wants to make sure that everything goes off without a hitch. During an interview with ABC News, he jokingly said that he has a plan in place in case Carrie goes into labor during the ceremony.

“You think I’m not ready?” Brad said. “You think we don’t have a satellite truck ready to go? I’m pretty sure we’ve already figured out the route to hospital…”

But Brad said it’s highly unlikely that he’d need to put his plan into action, because that would mean the baby would be making his or her arrival super early.

That’s when he provided some insight into when Carrie may be due, saying, “She looks further along than she is. That would be a pretty early baby.”

How Her Pregnancy Will Affect The Awards

Carrie said herself during an interview with Ty, Kelly & Chuck in September that it seems like one day she just woke up and had a huge baby bump. So follow Brad’s hint and don’t view the size of Carrie’s stomach as an indication of when she’s due!

While it’s unlikely Carrie will go into labor, Brad said her pregnancy could still cause some hiccups in their typical process, especially when it comes to wardrobe changes.

“She’s just carrying around a ball,” he said. “So it’s gonna be really interesting to see how that affects the wardrobe changes.”

But Carrie already has experience with fast pregnancy wardrobe changes, since she was expecting her son Isaiah during the 2014 CMA Awards. Tune in below to watch a hilarious moment from that ceremony when Brad “accidentally” revealed that she was expecting a baby boy!