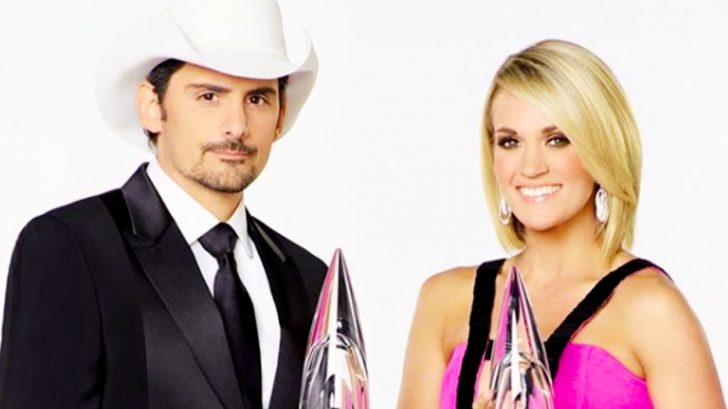 Over the course of the past ten years, country fans have witnessed some remarkable moments at the CMA Awards. Chris Stapleton had his breakthrough performance with Justin Timberlake in 2015, Garth Brooks won back-to-back Entertainer of the Year awards in 2016 and 2017, and a bunch of upcoming artists got the chance to make their dreams come true.

While every CMA Awards ceremony over the past ten years has been different from the next, there have been two constants…the hosts, Brad Paisley and Carrie Underwood.

Typically, Paisley and Underwood usually let fans know pretty early on in the summer that they’ll be returning to host the awards again in November. Last year, it was June when Underwood shared the news that they’d be returning as hosts.

Now August, the CMA Awards are only a few months away. And until now, no news about hosts had been revealed. The slight delay surely had some fans of Paisley and Underwood’s worried that the duo would not be returning to host.

After all, Underwood famously suffered a serious fall just days after the CMA Awards last year, and is now working her way back into the spotlight. And the other big country music awards show, the ACM Awards, already did a host swap this year when multiple-year host Luke Bryan and two-year host Dierks Bentley were replaced by Reba McEntire.

So if anyone had some suspicions that Paisley and Underwood wouldn’t be returning to host the CMA Awards, it’s easy to understand why.

Y’all can go ahead and breathe a sigh of relief, because they’ll both be returning to host the awards for an 11th time this year!

@BradPaisley and @CarrieUnderwood return to host the #CMAawards for their 11th time on Wed, Nov. 14 on @ABCNetwork.

As of press time, neither Paisley or Underwood has commented on the news. But knowing them, they’re already hard at work on their monologue and a fun new parody song.

If history has taught us anything, Paisley and Underwood are sure to craft something hilarious for us all to enjoy at the CMA Awards this year. Watch some of their best moments as hosts by checking out the clip below.

What do y’all think of this news? Are you glad to hear that Paisley and Underwood will be back to host the CMA Awards?