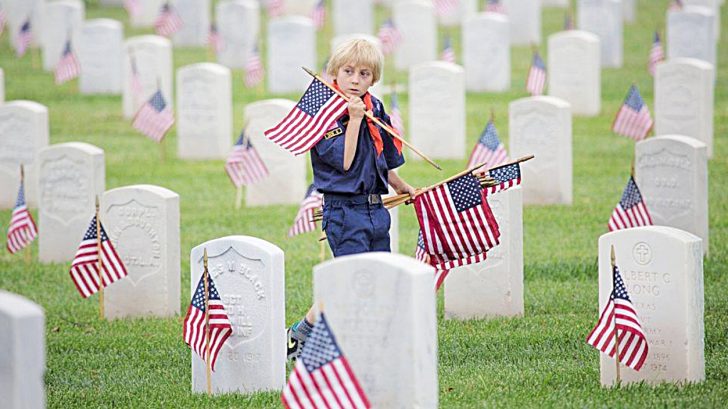 The Department of Veteran’s Affairs announced that the long-held tradition of the Boy Scouts planting flags on the graves of fallen veterans will be forbidden on Memorial Day due to the coronavirus pandemic.

In fact, all Memorial Day events on May 25th, 2020, are canceled this year according to the VA. The Boy Scouts, Girl Scouts, and other patriotic groups were particularly upset to hear the news and have been speaking out against it.

Patriots in Long Island, New York, are reportedly demanding that the VA reconsider this decision because there are more than 500,000 veterans buried in Calverton National Cemetery and Long Island National Cemetery that need to be honored. Those two cemeteries hold more veterans than any other military cemetery in the United States and have never missed flags being planted on the graves on Memorial Day.

“If we can’t figure out a way to make sure we are placing flags at their graves to honor them, then something is seriously wrong,” Steve Bellone, the Suffolk County executive told FOX NEWS.

Steve said he’s very confident that officials can create a strategy to keep the Scouts safe while abiding by the CDC guidelines. He asked the VA to allow the national cemeteries to decide with their local health department if it is safe for the Scouts to plant the flags, rather than telling all cemeteries across the whole country they must cancel the event.

“It is understandable to a point, but I don’t think that it is unreasonable to be able to put a plan together to be able to still accomplish the same thing we have done year after year, still following social distancing guidelines, having everybody masked up, with gloves on. It’s definitely doable,” 18-year-old Eagle Scout Kieran Monaghan said.

MY MESSAGE TO THE VA: ALLOW FLAG PLACEMENTS TO HONOR OUR HEROES ON MEMORIAL DAYIn Suffolk County, where more than 500,000 veterans are buried at two national military cemeteries, I am requesting the VA reconsider and rescind its ban on allowing groups to place flags on veterans' graves. Every year during Memorial Day, the Boy Scouts, Girl Scouts, and local veterans groups partake in this tradition to honor our American heroes and those who paid the ultimate sacrifice. People like 18-year-old Eagle Scout Kieran Monaghan, whose Dad is a veteran and was deployed in Iraq for a year.If we can't figure out a way to make sure we are placing flags at their graves to honor them, then something is seriously wrong. What we're asking the VA to do is, rather than have a blanket policy across the country, allow the national cemeteries at the local level to make this determination in conjunction with the local health department. We will take the responsibility to say that this flag placement plan meets the state and national guidelines but give us that opportunity to do it, allow us to honor our fallen heroes.

Posted by Suffolk County Executive Steven Bellone on Wednesday, May 13, 2020