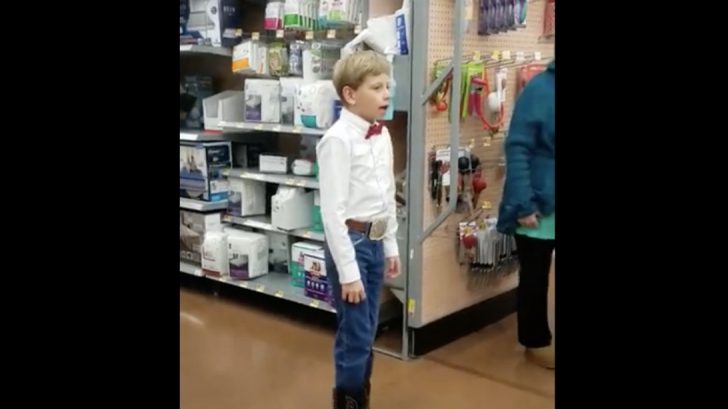 Mason Ramsey first caught our attention in 2017 when he was taped singing Hank Williams’s “Hey, Good Lookin'” in WalMart.

We kind of chuckle when we think of that performance, because that was nothing compared to what came on March 24, 2018.

Mason performed for his local Walmart again, this time singing Hank Williams’ ” Lovesick Blues” and “Jambalaya (On the Bayou).” The videos were posted to Facebook by shopper Dana Tanner and went completely viral!

Mason has been performing since he was just 4-years old and has become quite the little celebrity for his incredible ability to sing classic Hank Williams songs. He’s even earned the nickname “Li’l Hank.” Ramsey, who lives with his grandmother in Golconda, Illinois, has a love for classic country music that bleeds into his passionate renditions.

Mason is a regular performer on the Kentucky Opry and has won numerous talent contests including the Beginner Division of the 27th Annual Kentucky Opry Talent Search.

Mason’s star power completely took off after he went viral! He’s been on The Ellen Show, performed at the Grand Ole Opry, performed at both Coachella and Stagecoach, released original music, signed a record deal, and opened for Florida Georgia Line at their Vegas residency.

He also has almost 2 million Instagram followers, and is currently headlining his own tour!

Can y’all believe a viral video kick-started this kid’s career?!