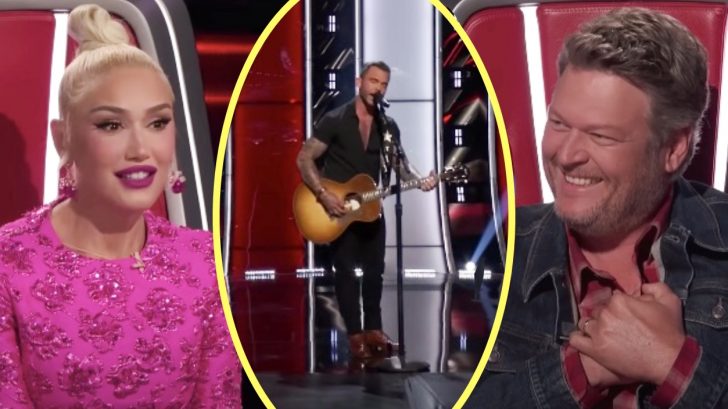 Season 22 of The Voice aired its first episode on Monday night (September 19). The season kicked off with some incredible blind auditions.

Several artists performed country songs, including a singer named Jay Allen. He covered Cody Johnson‘s “‘Til You Can’t,” which was released in 2021 and was a #1 hit on both of Billboard‘s country charts.

Allen’s performance of “‘Til You Can’t” started off subdued, with his voice at a near whisper. The coaches listened intently, but none of them turned their chairs right away.

The coaches continued to listen as Allen powered through the chorus. It was actually Blake Shelton who turned his chair first. For awhile, it looked like he was going to be the only coach to turn. But Stefani flipped her chair around at the last second.

“I knew you were gonna do that!” Shelton called out to Stefani, who he married in 2021.

“I had to!” Stefani responded.

Stefani tried to convince Allen that she would be a great coach for him. Although she isn’t a country singer herself, she does have two #1 country duets with Shelton. She also told Allen picking her as his coach would be a “two for one” situation since she could always asks Shelton questions about country music. But Shelton laughed and joked that he wouldn’t be willing to help if Allen didn’t pick him.

Allen said his father introduced him to all of the country legends, but he also likes rock music. Hearing that made Stefani believe she actually stood a chance!

From there, Allen explained why “‘Til You Can’t” means so much to him. His mother passed away in 2019 after being diagnosed with early onset Alzheimer’s a few years prior. The coaches were touched by his story, and asked him to play the song he wrote about his mom’s diagnosis. Allen told them that song has gone on to raise millions of dollars for Alzheimer’s research.

John Legend complimented Allen before he asked who he’d like to be his coach…Shelton or Stefani?

“Blake I’m a giant fan, I respect you so much…” Allen said.

Shelton knew what was coming next, and exclaimed “Oh no, oh no.” before Allen continued.

“...but I have to choose your wife,” he said. Stefani jumped out of her chair in shock…she couldn’t believe that Allen chose her as his coach!

Head below to watch Allen’s powerful blind audition performance and see the moment when he picked Stefani to be his coach.