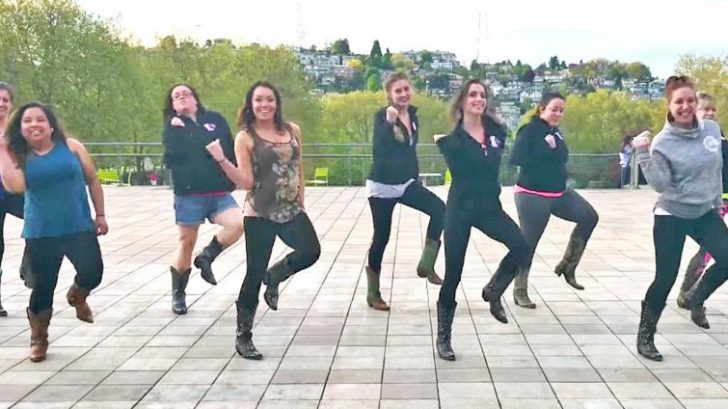 Grab your dancin’ boots, because we’ve got one smokin’ hot line dance for y’all!

By now we’re sure your familiar with the lovely and talented ladies in the Boot Boogie Babes, a line dance team out of Seattle, Washington.

Led by choreographer and director DeAnna Lee, the Boot Boogie Babes have obtained worldwide fame thanks to YouTube videos of their various routines.

So Many Spunky Dances

For the most part, the Boot Boogie Babes craft dances that coordinate with modern country hits.

They’ve grooved along to Miranda Lambert and Carrie Underwood‘s “Somethin’ Bad” and showed some serious spunk in a dance to Maddie & Tae‘s “Girl in a Country Song.”

As you can tell, the Boot Boogie Babes like dancing to songs performed by more than one artist. So it came as no surprise when they decided to share a routine to one of the hottest duets in country music within recent times, Cole Swindell and Dierks Bentley‘s “Flatliner.”

This Will Get Your Heart Pumping

Released in January 2017, “Flatliner” serves as the third single off of Swindell’s album You Should Be Here. The song torched the country charts after its release, climbing as high as the 10th position on the Hot Country Songs chart and the second on the Country Airplay chart.

With its upbeat tempo, “Flatliner” was basically begging to have a dance to go along with it. The Boot Boogie Babes delivered, and the resulting routine is sizzlin’ hot and full of sass.

The Boot Boogie Babes’ “Flatliner” routine features fast kicks, scuffs, snaps, and turns that kept everyone moving. While all of those typical line dance moves are prevalent, the choreography takes on its own personality through body rolls and plenty of hip shakin’!

You can tell that the girls had a lot of fun with this routine! It’s one that you’re likely to enjoy as well, so why don’t you jump up and give it a shot?