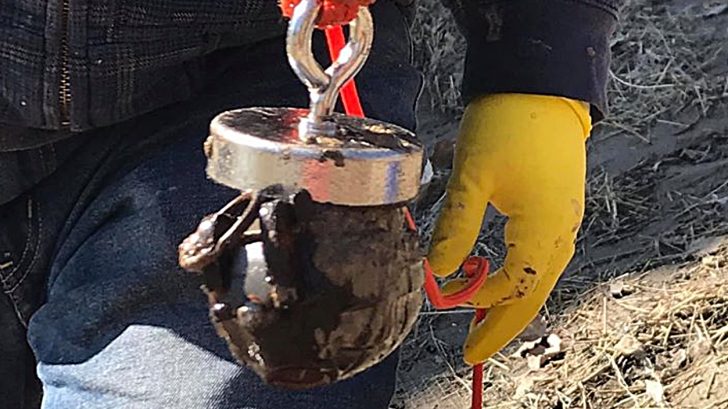 31-year-old Brianna Clarke and 42-year old Chuck Morgan found a live M36 frag grenade with the pin still in it while they were magnet fishing over a bridge in the Thames River on Victoria Road in Thamesville, Canada.

“When I saw what it was, I’m like – pardon my language – ‘Holy (crap) it’s a grenade,’” Morgan told Chatham Daily. “I definitely knew what it was right away.”

As Chuck was pulling it out of the water he began to realize what his magnet had stuck to, a grenade. What really shocked him though is that he noticed the pin was still in it, which means it could have potentially exploded on the couple.

Trying to decide what to do with it, Morgan held the rope and let the grenade stay dangling under the bridge. The couple said after about 10 minutes they really didn’t know what to do so they called the cops.

Chatham-Kent police instructed them to put the grenade down and walk away from it until the authorities could get there. Once police arrived they told Brianna and Chuck to leave the area for their own safety. Police then took pictures of the grenade and sent them to the Canadian military to identify the type of grenade that it was.

Bomb disposal unit members from Camp Borden arrived shortly on the scene and took the grenade with them. They most likely transported it to a safe area to defuse or detonate it. The couple wanted to know if they could possibly keep it after experts defuse it because he wants it for a conversational piece and the officials said if the grenade explodes they’d be lucky to get their magnet back.

Brianna says that day they pulled up old coins, a horseshoe, a tricycle, scrap metal, and even an ice skate, but the grenade is by far the most interesting thing they’ve ever found. No video was recorded of this but below you will find another video of a guy finding grenade parts.