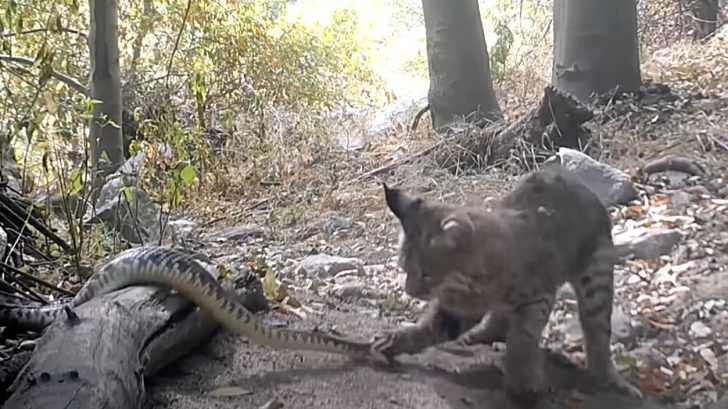 “Hang onto your seat for this one, it’s a real nail-biter,” photographer Robert Martinez wrote on Facebook on October 9th, 2020.

The footage allegedly took place at the Angeles National Forest near San Fernando, California and it showed the bobcat casually walking through the forest perfectly where the camera was set up. As it approached a pile of wood to the left of the screen, a four-foot rattlesnake jumped out of the brush and lunged towards the bobcat.

The bobcat quickly slapped the snake on the head and bounce it off the ground. The rattlesnake continued to strike at the bobcat in attempts to defend its life but the feline was too agile and powerful for the snake.

“That bobcat knew what it was doing, as if it had done this before. Confident, hungry,” a follower commented on his Facebook post. “Wild critters rarely risk death for a meal. Bobcat looked more confident than starving.”

The bobcat ultimately out-matched the snake by catching it behind the head and biting it. The cat rolled around in his victory kill and then carried it off into the woods.

Bobcat Vs Rattlesnake Video Below