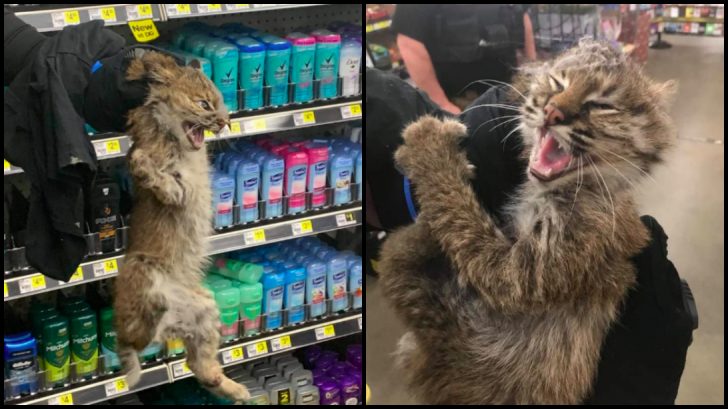 Dollar General employees in Kentucky had an unusual shopper last week. While the guest wasn’t the first to enter the store to peruse the personal hygiene aisle, it was the first shopper of the feline variety to do so.

Employees at the Dollar General store in Martin, Kentucky, were surprised to find a bobcat on the deodorant aisle Wednesday night (October 14). According to a Facebook post from the Floyd County Sheriff’s Department, the feisty feline was captured and removed from the store with the help of deputies, Kentucky State Police troopers and Martin Police.

This little fellow was captured tonight inside a store after store employees called and reported it being inside. …

No humans or bobcats were injured during the capture, but the bobcat appeared to be none too happy to have his shopping trip cut short.

Bobcats can be found throughout North America, but usually try to avoid human encounters. The docile cats pose no threat to humans, but always tend to make people nervous when spotted in urban areas. They may be shy, but they’re also tough. In 2019, a pair of bobcats were photographed atop a giant cactus in Arizona. Apparently this is the norm for bobcats that live in the southwest U.S. where cacti are in abundance. The prickly plant provides protection for the bobcats whose tough paws are immune to the prickly needles of the cactus.

Have you seen these incredible #bobcat photos taken by Mindy King and shared by our friends at @fox10phoenix? It might not be the comfiest place, but a saguaro makes great protection from threats! (And really cool photos!)???#Caturday #CaturdayEve pic.twitter.com/4n6aUMDVNa

Though bobcats have been spotted in some pretty interesting places, it’s going to be tough to beat the one that went shopping at a Kentucky Dollar General. See footage of the Dollar General bobcat’s capture below.

A bobcat was found inside the Dollar General in Floyd County, KY.

Multiple Floyd County Law Enforcement Officers respond to a call that a bobcat made its way inside the Dollar General store located off KY-680 in Floyd County, KY.