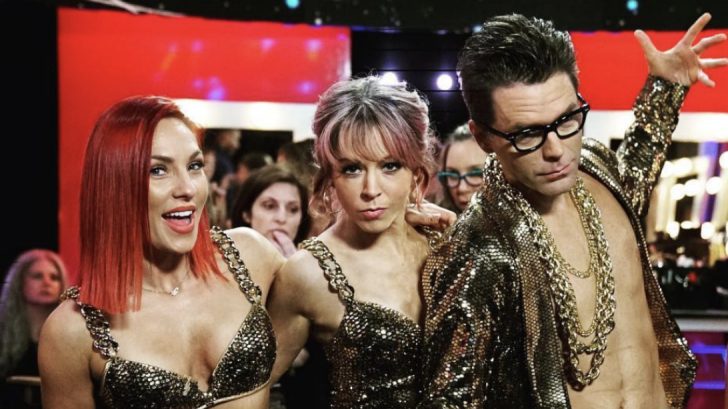 Beloved country radio host and Dancing With the Stars contestant Bobby Bones has done it again! Bones won us over yet again with his enthusiastic performance during Monday night’s episode of DWTS that featured him dancing with two partners.

38-year old Bones is arguably this season’s biggest underdog. He said himself that he is perhaps the least well known of the celebrities competing on the reality dancing competition’s 27th season, but that has only lit a fire under Bones that might very well win him a mirrorball trophy.

Known as The Most Powerful Man in Country Music, Bones is well-known among country music fans for his nationally syndicated radio show, The Bobby Bones Show, that airs on more than 120 stations and is the No. 1 country morning show in the nation. Bones has also authored two books, one of which became a New York Times Best Seller. In the books, Bones detailed his childhood in which he overcame enormous odds to find success. He is doing the same on Dancing With the Stars.

Prior to the first week of competition, Bones had the worst odds to win the show.

The odds are out. And I have the worst odds to win the show. Much like every other aspect of my life… time to prove some folks wrong. Appreciate you ??????

But, his unbridled enthusiasm and over-the-top personality has endeared him to his fans, new and old. After four weeks of competition, Bones is now a front-runner to win the coveted mirrorball trophy.

During Monday night’s (October 15) episode of Dancing With the Stars, Bobby Bones channeled his inner rapper for an invigorating hip-hop/cha-cha dance set to MC Hammer’s 1990’s hit, “U Can’t Touch This.” Like all of Bones’s dances before, he gave it 100% and drew us in with his enthusiasm. But, unlike his previous performances, Bones was joined by two dance parters instead of one for the show’s Trio Week.

In addition to his regular pro dance partner Sharna Burgess, Bones was joined by violinist and Dancing With the Stars alum Lindsey Stirling. Stirling first appeared on America’s Got Talent where she was told she didn’t have what it takes to succeed.

She took her unique art as a dancing violinist and utilized the YouTube platform to make a name for herself. She is now one of the most successful musicians in the industry and plays to sold-out arenas around the world.

Lindsey Stirling was the obvious choice to join Bones and Burgess Monday night as she and Bones share a common bond: They both overcame incredible odds to find success.

From the moment Bobby Bones hit the dance floor, we were intrigued. The “hammer pants,” the gold jacket and oversized chains around his neck…we couldn’t look away.

Despite Bobby’s flawless performance, the judges claimed that the cha-cha got lost in translation.

“You took a sledgehammer to the cha-cha-cha,” judge Bruno Tonioli told the trio before complimenting Bobby. “It’s always so fun watching you. What you do out there is so entertaining.”

Judge Carrie Ann Inaba agreed, saying, “Bobby Bones, the world is a better place because you’re in it. You just bring so much joy because you’re so authentic.”

Despite the praise, Bones received the second lowest score of the night. But, his “B Team” came through in a big way and helped him avoid elimination. He even got a stamp of approval from MC Hammer himself who tweeted throughout Bobby’s routine.

Check out Bobby Bones, Lindsey Stirling and Sharna Burgess dancing a cha-cha to “U Can’t Touch This” in the video below.