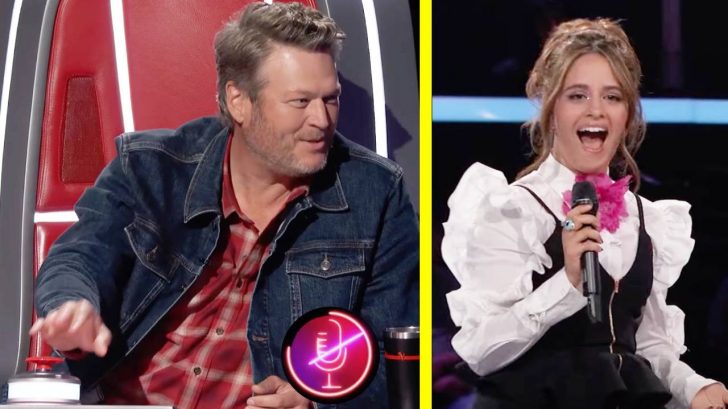 The 22nd season of The Voice premiered on Monday, September 20th on NBC. Blake Shelton returned for his 22nd season, and joining him are John Legend, Gwen Stefani, and newcomer Camila Cabello.

This season is already heating up with some fierce competitors! Normally, the country singers all flock to Shelton’s team, but in just the first episode, he lost two country artists to Stefani and Cabello. So it’s safe to say that he is pulling out all the stops!

That means his antics are at an all-time high. Kate Kalvach from Oklahoma City auditioned with Kacey Musgraves’ hit song “Rainbow,” and impressed Shelton, Stefani, and Cabello enough for the three of them to turn their chairs.

The second Kalvach revealed where she was from, Stefani and Shelton both hooted and hollered – because as we all know, Shelton is an Okie as well!

As the former Fifth Harmony member started trying to convince Kalvach to join her team, Shelton pressed his button, which ended up muting Cabello’s microphone! All the coaches asked why Shelton’s button does that, but not theirs and he said, “It’s part of my contract!”

Her mic came back on but after she called Shelton a grandpa, he muted her again! Kalvach offered up her own microphone to Cabello and the second she started talking, Shelton muted that mic! Legend came over to try to help out as well but Shelton muted his mic, too!

Cabello was finally able to say her piece, and so was Gwen. Shelton used some of his time to try and bring out a goat, but it wouldn’t follow him. Legend pointed out that Shelton was trying to say that he is the “GOAT (Greatest Of All Time) of The Voice.”

When it came time for Kalvach to pick her coach, she said that Shelton was going to be her first choice, but he didn’t even fight for her. This led to Shelton yelling over the crowd, pleading her to join his team. Unfortunately, the clip cut out and read, “To be continued tomorrow night.”

Which coach do you think she will pick? Watch her full audition (and all of Shelton’s antics) below.