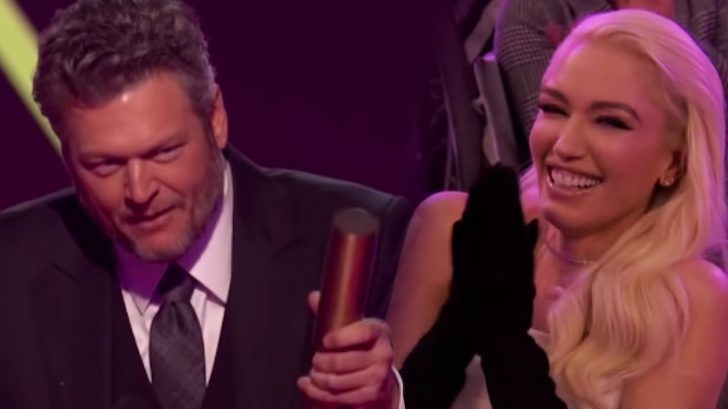 The 2019 E! People’s Choice Awards took place on Sunday (November 10), and two of The Voice‘s favorite coaches walked away with trophies!

Gwen Stefani won the Fashion Icon Award. She lived up to that title in her awards show ensemble, which was an elaborate, white gown with a large, black bow on the back. She accented the look with a pair of fishnet stockings and a pair of thigh-high boots.

What an amazing night last night was [email protected]!!! Thx for such an incredible evening ❤️ gx #PCAs @eentertainment

But Stefani’s best accessory was her date, Blake Shelton.

After four years of dating, Stefani and Shelton are now pros at walking the red carpet together. And they’re also experts at thanking each other in their acceptance speeches.

Shelton proved his love for Stefani in an acceptance speech he gave at the People’s Choice Awards this year, since he was named the Country Artist of 2019.

Blake Shelton's shoutout to Gwen Stefani during his #PCAs speech is the most Blake Shelton thing ever. https://t.co/3gQuf5Siik

After hitting the stage to accept his trophy, Shelton joked about how he had been the only person at his table who hadn’t won anything that night. “It was starting to get a little bit embarrassing,” Shelton quipped.

He then took the time to thank his fans and his NBC Voice family. Of course, he couldn’t mention The Voice without offering a shout-out to his girlfriend and fellow coach.

Exclaiming how excited he was to hear that he could swear on the show, he said, “Gwen Stefani, I love the s— outta you!”

His declaration prompted a loud cheer from the crowd, and Stefani could be seen smiling from ear to ear.

You can watch Shelton’s full People’s Choice Awards acceptance speech in the video below. He sure made a statement with it!