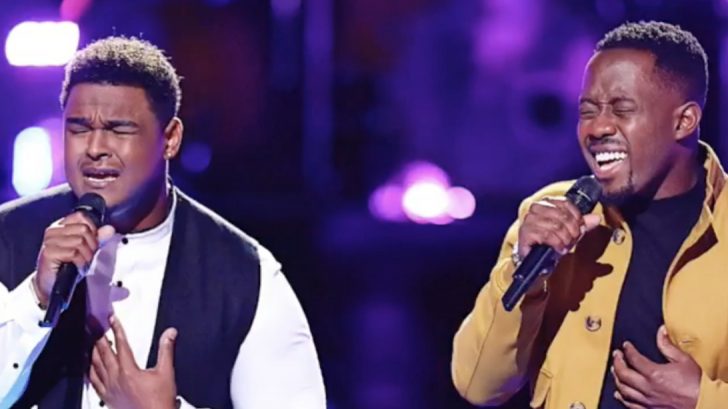 In what was arguably the best Battle Round performance of The Voice‘s 15th season, Blake Shelton used his steal to guarantee that the nearly-eliminated contestant had a place in the Knockout Rounds that kick off next week.

On Tuesday night (October 23), coach Adam Levine put DeAndre Nico and Funsho in a head-to-head battle in which only one would survive. The two sang “Can You Stand The Rain” by New Edition. Nico and Funsho performed as if they’d been singing together their whole lives in a soulful musical banter that blew the judges away.

You may recall that DeAndre Nico earned one of the few four-chair turns of the Blind Auditions with the Bruno Mars hit “When I Was Your Man.” The coaches praised his wide range and soulful sound and each fought hard to secure Nico for their team.

“You have so much skill. Obviously you guys have some similarities when it comes to all the cool range-y things you can do,” Blake said referencing the common bond between coach Jennifer Hudson and Nico. “Kelly is the current champion. Adam was the first coach to hit his button. Or, you could go with me, the winningest coach in Voice history. I’ve won this show six times.”

It’s perhaps pure irony that Nico’s Battle Round partner, Funsho, also auditioned with a Bruno Mars song and earned a three-chair turn. Funsho’s fun, flawless cover of Mars’ “Finesse” had the judges and the audience dancing along. The judges’ praise of his performance was similar to Nico’s, in part because their similar vocal style and range.

“You’re such a great vocalist. A lot of times when people do up-tempo songs their voices get lost in the music, but he was riding every note,” coach Jennifer Hudson said. “That’s what made me turn my chair. You’re amazing.”

Funsho and Nico reminded us Tuesday night exactly why the judges fought over them during the Blind Auditions. As they shared the stage for the first time during Tuesday’s Battle Round, the men swapped the lead and took turns on the harmonies in a performance reminiscent of soulful quartets of days gone by.

The judges had nothing but praise for Nico and Funsho. “This is what we hope for in the Battle Rounds. Two incredible vocalists making great music, but also laying it all out on the line at the same time,” Blake Shelton said.

Kelly Clarkson and Jennifer Hudson were just as complimentary while also showing their regret for using their only steals early in the Battle Rounds. Adam Levine decided to keep DeAndre Nico on his team and eliminate Funsho. Blake Shelton, who was the only judge who didn’t turn his chair for Funsho during the Blinds, wasn’t about to let him get away again. He chose to use the final steal of the Battle Rounds and add the velvet-voiced singer to his team. We think you’ll agree that Blake made the right decision.

Watch DeAndre Nico and Funsho sing “Can You Stand the Rain” in the video below.