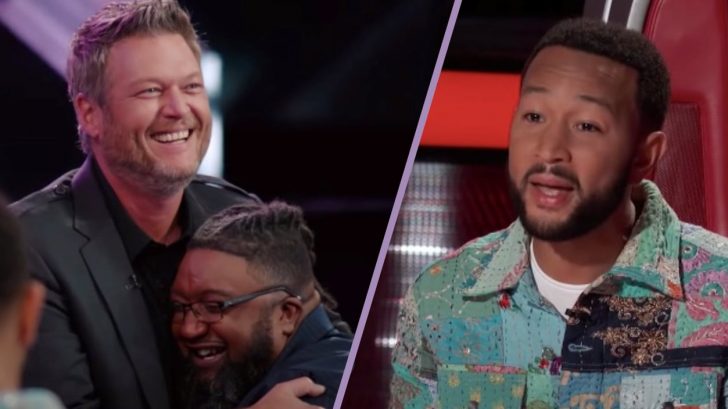 Paris Winningham made a powerful first impression when he performed Stevie Wonder’s “Superstition” for the Voice blind auditions during Season 21. He got two chairs to turn, and chose John Legend as his coach.

Winningham continued to prove himself when the battles started. He and fellow Team Legend member Jonathan Mouton delivered an outstanding performance of Luther Vandross’ “Here and Now.”

Their performance left Legend with a tough choice to make. He eventually named Winningham as the winner of the battle, and it looked like Mouton was going to be sent home.

Then at the last minute, Blake Shelton used his “steal” to welcome Mouton onto Team Blake.

Unfortunately, Mouton was later eliminated during the knockouts. And his former teammate Winningham was nearly eliminated too.

During the knockouts, Winningham competed against another member of Team Legend, Jershika Maple. Maple sang first, and delivered a stunning cover of Natalie Cole’s “Inseparable.”

After Maple finished, Winningham took to the stage for his own performance. He covered “Tennessee Whiskey,” which was originally recorded by David Allan Coe, later covered by George Jones, and turned into a modern hit by Chris Stapleton.

Since “Tennessee Whiskey” has been covered so many times by so many people, Winningham was under a lot of pressure to make his version stand out. He rose to the challenge, and delivered a cover that clearly impressed the Voice coaches.

But Maple also delivered an extraordinary performance, and Legend named her the winner of the battle.

It looked like Winningham’s journey on The Voice had come to an end. Then, just like he did previously for Winningham’s battle partner Mouton, Shelton jumped in with a “steal.”

“It’s perfect that Paris ended up on my team,” Shelton said after using his steal on Winningham. “He sang a country song for God’s sakes. And moving forward I want to keep finding songs for him that allow him to have that kind of personality on the stage.”

Tune in to the video below to watch Maple and Winningham’s knockout performances. Watch all the way through to see the thrilling moment when Shelton stole Winningham from Legend!