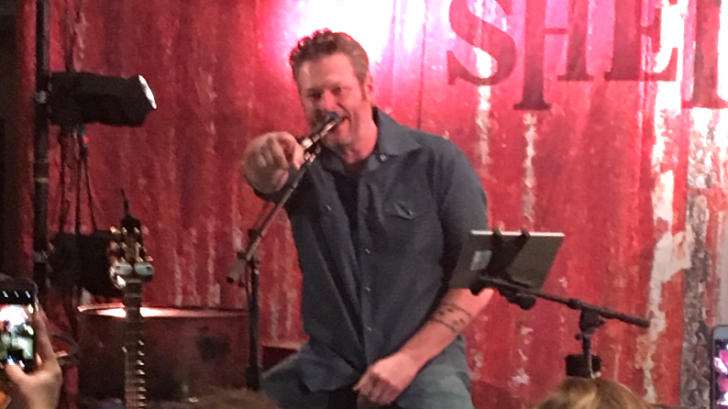 Blake Shelton has been a seasonal resident of Los Angeles ever since he was named a judge on Season One of NBC’s hit show The Voice back in 2011. However, it sounds like it took the country singer more than just a few years to find just exactly what his favorite thing to do in L.A. is.

At a concert in his home state of Oklahoma, Shelton spoke candidly about his red-hot romance with girlfriend Gwen Stefani in between performances of his hit country songs.

During a round of Q&A’s with his fans, the country singer opened up about his seasonal residence in sunny California.

While Shelton’s answer to the first half of the fan’s inquiry is nothing short of sweet, things took a PG-13 turn when he answered the second part of the question, what’s his favorite thing to do once he’s in L.A.

“And the one thing I like to do there…” Shelton joked, before continuing, “I can’t say her name again there can I? That would be completely inappropriate.”

The audience erupted with laughter following the country singer’s “inappropriate” yet hilarious joke.

Shelton and Stefani began officially dating back in late 2015 after meeting as coaches on the set of Season 7 of The Voice.

You can check out Shelton’s hilarious joke below.

@blakeshelton answer to what he likes about LA, and what he likes to do there. @gwenstefani #whipped #maninlove #firelover pic.twitter.com/wimrexShVT