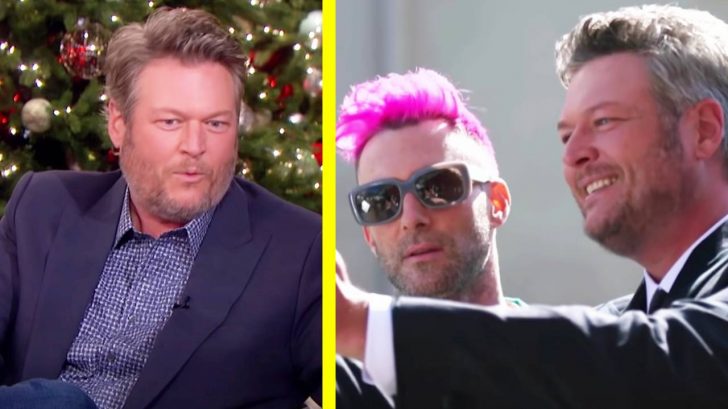 Due to his new album, Shelton has been doing interviews and given performances on shows including The Tonight Show Starring Jimmy Fallon and The Ellen Show.

These are some of his first interviews since tying the knot so they are congratulating him, like Ellen DeGeneres did.

As she did so, Shelton showed off his wedding band and talked about the big day. He joked about his interviews before the wedding when he basically said he’d let Gwen take care of anything, which made him look like a deadbeat, “which I am,” he said.

Ellen then brought up the very small guest list and Shelton confirmed there were less than 30 people in attendance. She brought up a past interview that she did with Adam Levine in April 2021.

Levine said, “I don’t support their marriage. She’s so cool, and he’s not. I’ll go to the wedding, and I’ll object. I will probably not be invited, now that I’m saying this on live television, but I’ll be there, somehow.”

But…turns out, he wasn’t there because he wasn’t even invited!

Shelton revealed, “That’s the reason we didn’t invite him to the wedding is that interview he did on your show. It’s like, ‘I’m not inviting him.'”

DeGeneres said if that interview wouldn’t have happened, he would have been invited and without skipping a beat, Shelton said, “Well, we’ll never know. I purposely did not invite Adam Levine to my wedding – and I think it’s funny.“

Watch the interview below.