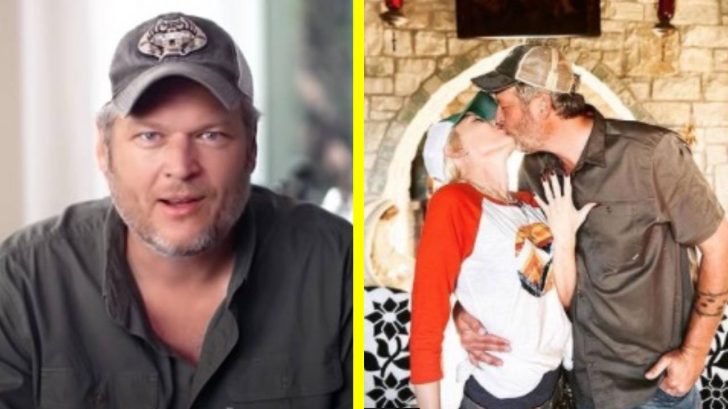 In October 2020, Blake Shelton proposed to his girlfriend of five years, Gwen Stefani, at their ranch in Oklahoma. He announced the news on Instagram, writing, “Hey @gwenstefani thanks for saving my 2020… And the rest of my life.. I love you. I heard a YES!”

Both singers have admitted that they aren’t going to get married soon due to the coronavirus pandemic and want to be able to celebrate with everyone they love, but that hasn’t stopped either of them from talking about the proposal and their future plans.

Shelton was the latest of the couple to discuss their relationship with fellow country singer Luke Bryan on the American Idol judges’ Apple Music radio show Party Barn Radio.

Two chances to listen to Episode 2 of Party Barn radio this weekend. Saturday, 10am and Sunday, 4pm CT on Apple Music. Don’t miss out! apple.co/partybarn

During the 40+ minute conversation, Bryan brought up Shelton and Stefani’s upcoming nuptials, which he once offered to officiate, and the Voice coach revealed that the only plan he has so far for the wedding is to lose 20 pounds.

He says it is because he gained “117 pounds” during quarantine with Stefani and her family. Bryan then asked him on a scale of 1-10, what the likelihood of him actually following through would be, Shelton said, “I feel like if I say 10 [out of 10], I have to do it. So 10. It’s out there now. I can’t let people down.”

The “Anywhere With You” singer admitted that he actually was attempting to lose weight during quarantine but it hasn’t worked, so he took matters into his own hands.

“I’ve readjusted all the mirrors in the house, so they look like when you’re taking a selfie from up above because I can’t even stand to look at myself in the mirror,” he joked. “So I’ve rearranged them where they’re kind of angled down, looking down on me, so I’m looking up, and it’s not so bad.”

At least he knows how to work those angles! We wish Shelton the best on his weight loss journey!

Listen to the full episode below.