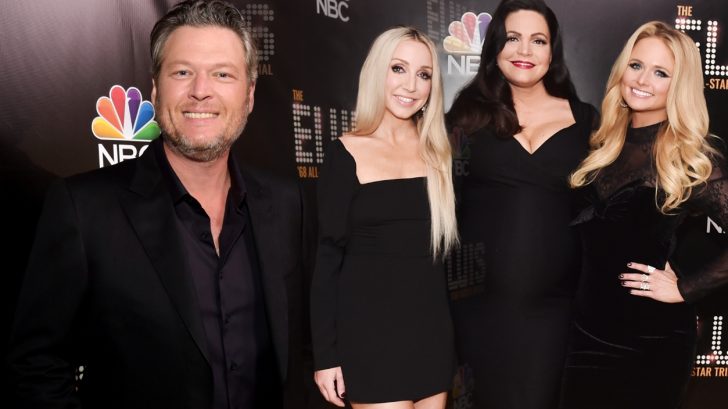 For one of the first times ever stepping foot on the same stage, Blake Shelton, Miranda Lambert, Ashley Monroe, Angaleena Presley, Shawn Mendes, Carrie Underwood, Jennifer Lopez, John Fogerty, and many more will perform an unforgettable tribute to The King – and honor his world-famous ’68 Comeback Special.

We got to sing a song in honor of one of our FAVORITES. #ElvisAllStarTribute || Feb 17 @nbc ?: Alberto Rodriguez / @gettyimages

Over 50 years ago, on December 3, 1968, Elvis Presley took to the stage for a television performance like no other. His first in more than 7 years, this was the biggest event of the year for most of his fans and became the No. 1 rated show for NBC that season.

Now, NBC is honoring the legacy left behind by one of the biggest names in all of music with a magical night filled with tributes to the one and only – Elvis Presley.

Dubbed the Elvis All-Star Tribute, this one-night-only event is sure to be a grand event you won’t want to miss!

“I can remember sitting in front of my television set and watching the Elvis special,” says producer Ken Ehrlich in a press release. “I already knew that I could never do what he did as an artist, but seeing that show had a great deal to do with my dreams of having a career in television production.”

On top of some of the biggest stars performing one-of-a-kind tributes to The King, this stunning special will bring rare footage of Presley to televisions across the world.

The high note at the end? This quality is kinda bad, but they will release the real thing february 17. Imagine the high note in the real recording, with good quality!Remember when I said I was probably gonna post around three times this week? I just did that in days? I like posting, and I’m happy with every like and follow, even though it’s not that much, so thank you! #shawnmendes #mendesarmy #elvisallstartribute (I got the video from DJ Stitches Brasil on youtube)

list of performances for the #ElvisAllStarTribute . #blakeshelton has 4 performances. will air on February 17 from 9-11 p.m. (ET/PT). #postmalone #shawnmendes #kelseaballerini #littlebigtown #carrieunderwood

Blake Shelton will be performing several hits throughout the night and also take up hosting duties. Miranda Lambert and her Pistol Annies bandmates will sing “Love Me,” and Carrie Underwood will join gospel star Yolanda Adams for a gospel medley.

To say the least, this will be a night filled with remarkable talent!

Watch a performance from Elvis’ original 1968 special below and let us know if you’ll be tuning in.