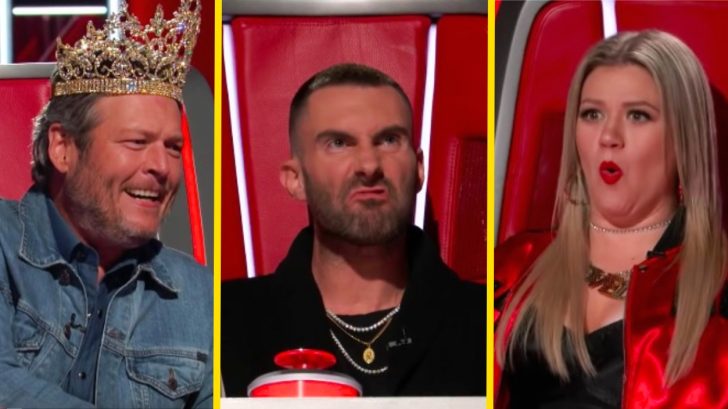 What You Don’t See On TV

Whenever y’all tune in to watch The Voice, you can always count on getting a good laugh or two out of the coaches’ arguments and antics. But some of the most hysterical stuff that goes down on set never makes the final cut.

Luckily for y’all, The Voice often shares exclusive digital clips that feature bloopers and hilarious moments from the show that never aired on television. In honor of Season 15’s blind auditions, The Voice released what has to be one of the silliest blooper reels we’ve ever seen from the show.

For example, at one point in the clip Shelton can be seen sporting an extravagant crown and challenging Clarkson’s standing as the coach who won the previous season.

It Gets Even More Hilarious

One of the most rib-tickling moments is when Clarkson finds out that a contestant grew up in Texas and is from a city that was a sports rival of hers when she was younger. That prompts her to say something completely unexpected.

“What?” she exclaims, standing up in her chair. “Oh my gosh! I used to kick y’all’s a– in volleyball.”

Hiding her face in embarrassment, Hudson couldn’t help but laugh as she said, “Kelly, no!”

We could keep on describing all of the goofy moments this clip contains, like the one where Levine tries to figure out if Shelton is more like the tortoise or the hare. But we think it’s best to let y’all witness the rest of the hilarity yourselves.

Between getting tongue-tied, acting silly, and teasing each other, the coaches provided us with no shortage of funny material for this blooper reel. Go ahead and check it out below, and prepare to laugh the entire time.