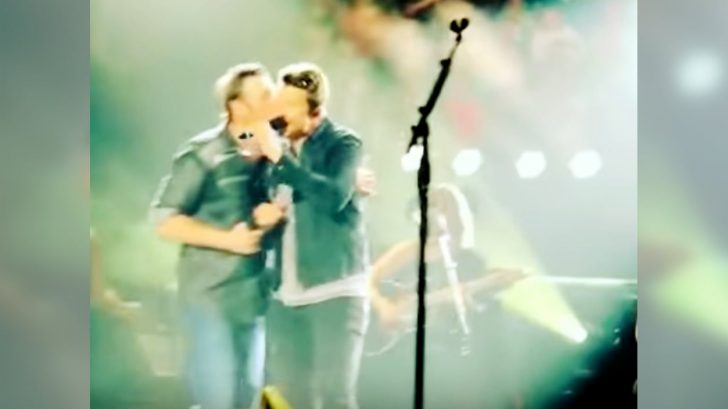 Showering Everyone With Kisses

Blake Shelton has never been afraid to show his affection for others. Take his relationship with pop star and fellow Voice coach Gwen Stefani as an example.

Whenever the two perform together, Shelton never hesitates to share an embrace or a romantic kiss with his girlfriend of several years.

But Shelton doesn’t reserve these public displays of affection exclusively for Stefani. In fact, he has a long history of planting smooches on some of his best friends, most of them being his fellow male country stars.

Past Targets Of Shelton’s Smooches

Just take a look at the below clip from their behind-the-scenes interview before the 2013 ACM Awards. In less than two minutes, Shelton tries (unsuccessfully) to kiss Bryan on the cheek, and also ends up kissing a cardboard cutout of himself.

Someone else who often finds himself on the receiving end of Shelton’s kisses is his longtime buddy and mentor, Trace Adkins.

As just one example out of many, Shelton sneakily kissed Adkins on the cheek when he hugged him prior to his acceptance speech at the 2015 CMT Artists of the Year ceremony.

Although Adkins joined Shelton on his Country Music Freaks tour, for once he wasn’t the one that Shelton was smooching.

Instead, he greeted his opening act Brett Eldredge with a surprise kiss while they were in the middle of singing Shelton’s “All About Tonight.”

A fan happened to capture the hilarious moment on camera. Eldredge was singing and minding his own business when Shelton suddenly rushed to his side and smooched him on the cheek.

As you would expect, Eldredge was obviously a bit taken aback by Shelton’s surprise kiss. He couldn’t help but giggle for a second afterward, but seemed to quickly regain his composure.

However, Eldredge broke a little bit again once Shelton joined him by his side. We can’t blame him for laughing, because we would have reacted the same way!

You can catch the comical moment in the clip below. We’ll never get enough of Shelton and his sense of humor!