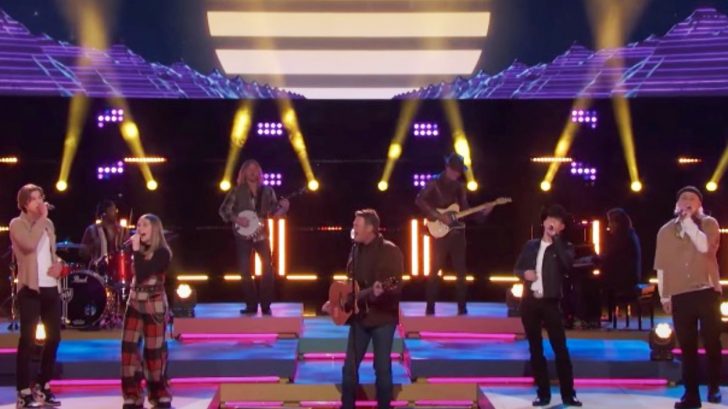 The Voice coaches join members of their team for a special performance each season. During Season 22, Blake Shelton united with his team members Brayden Lape, Rowan Grace, Bodie, and Bryce Leatherwood for a cover of a country classic…Glen Campbell‘s “Southern Nights.”

Allen Toussaint, who wrote “Southern Nights,” was actually the first artist to record the song. Campbell’s version was released in 1977, and it was a smash success. It claimed the #1 spot on three of Billboard‘s charts: The Hot Country Songs chart, the Adult Contemporary chart, and the all-genre Billboard Hot 100 chart.

In other words, “Southern Nights” is a song that lots of people know quite well. Because of this, many people who tuned in to The Voice were surely thrilled to hear Team Blake cover the tune.

Shelton kicked off the song on his own. Leatherwood was the first contestant who chimed in, followed by Grace and Lape singing together. Bodie jumped in for his own solo moment after that.

Of course, the best part of the performance came when all four team members and Shelton started singing at once. They sounded so good together!

Voice viewers ended up loving Team Blake’s rendition of “Southern Nights.” Some of the comments on the YouTube video of the group’s performance were:

“This was a team of an amazing performance ! They all sounded so wonderful ! I felt as if I was there live watching !”

“Blake has a great team. All so talented. Brake is a great coach!”

“I love hearing Blake like this. This is cool & different.”

Head down to the video below to watch Team Blake sing “Southern Nights.” We always love watching Shelton sing with his Voice contestants!