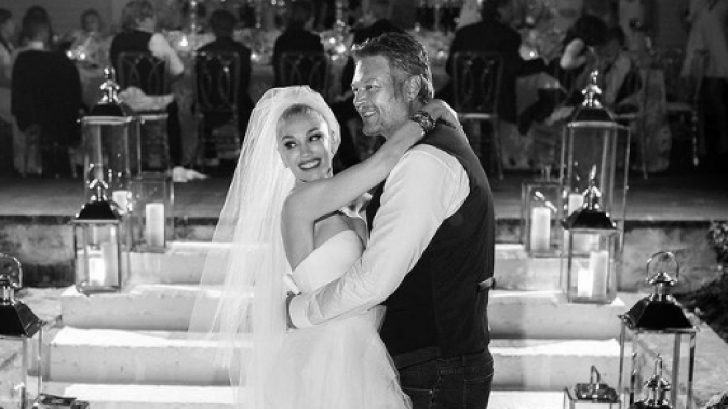 Gwen Stefani and Blake Shelton celebrated their first anniversary July 3rd. The couple took to their respective social media accounts to remember the day with photos, videos and special messages for each other.

Shelton shared a photo of he and Gwen dancing during their reception with a caption that read, “Happy anniversary to the woman that makes my world go round.. @gwenstefani, because of you, this year has been the best year of my life. I love you!!!! Thank you for saying yes!”

Gwen returned the favor by sharing a video montage of clips from their special day. The montage set to Elvis Presley’s “Can’t Help Falling in Love” gave fans a glimpse at the couple’s first kiss as husband and wife, an emotional moment from their first dance and the pair posing for photos. “1 year down, forever to go,” the caption read.

Blake Shelton and Gwen Stefani met in 2014 on the set of The Voice where both were coaches. One year later the musicians began dating after both went through highly publicized divorces….Blake from fellow country singer Miranda Lambert, and Gwen from Gavin Rosdale. By the end of 2015, Blake and Gwen were officially dating and made their red carpet debut together in February 2016 at the Vanity Fair Oscar party.

The couple dated for the next five years and gave us four duets including “Go Ahead and Break My Heart,” “You Make It Feel Like Christmas,” “Nobody But You,” and “Happy Anywhere.”

Blake and Gwen announced their engagement in October 2020 and wed at Blake’s Oklahoma ranch in July 2021. The wedding took place in a private chapel built just for the occasion, and was only attended by a handful of their closest family and friends.