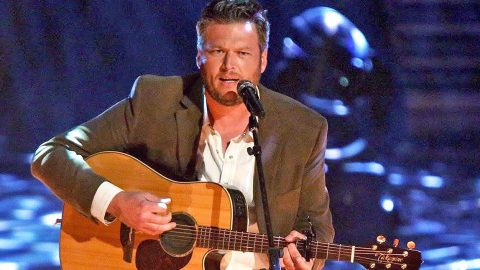 Blake Shelton can do it all. He can tug at our heartstrings and make us laugh all in the same sentence. When it comes to this particular performance, he has completely melted our hearts.

Blake performed the song “The Baby,” which was included on his 2002 album, The Dreamer. The song became Blake’s second ever number one hit, topping the Billboard Hot Country Songs chart and peaking at No. 28 on the Billboard Hot 100 chart.

The touching song tells the story of a mother’s love for her children. The narrator in the story is known as “the baby” of the family, and tells stories about growing up as the youngest of his siblings..

He sings, “I was the youngest child/So I got by with more“. Most of us can relate to either being the baby, or knowing someone who is the baby of the family, and let’s be honest, they do get away with everything!

He describes life, growing up with older siblings, and always being his mama’s “baby.”

In the end, “the baby” is a grown man and receives a call saying his mother is dying. He rushes to her side, but is too late. He sadly sings, “I softly kissed that lady/and cried just like a baby.”

The story is so touching and Blake’s performance is as moving as ever.

Watch his emotional performance below.