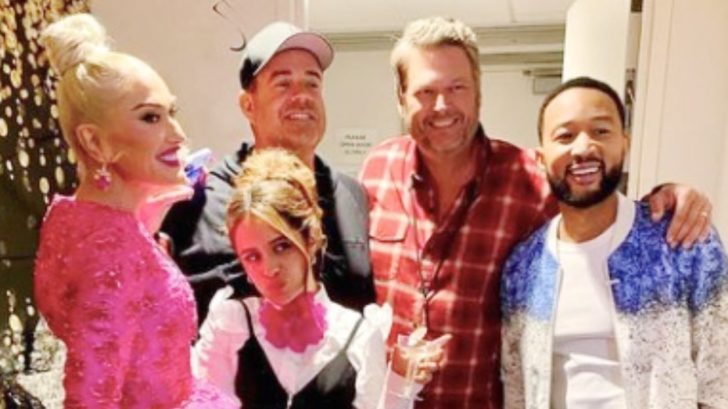 Blake Shelton and Carson Daly have grown incredibly close in the 11 years they’ve worked together on The Voice. Funny enough, the two friends have birthdays that are just days apart. Blake’s birthday is June 18 and Carson’s is June 22.

The duo is in the middle of filming the pre-taped portions for the upcoming season of The Voice. So they celebrated their birthdays with the crew and the other coaches!

There’s a slight shakeup in this season’s coaching lineup. Kelly Clarkson and Ariana Grande are not returning. Though longtime coach John Legend is back, as is Blake.

Gwen Stefani is returning to the show for her sixth season as a coach. There is one newcomer in the lineup…pop singer Camila Cabello.

All of the coaches and Carson took a behind-the-scenes photo when they celebrated Blake and Carson’s birthdays on set. Carson shared the photo on Instagram along with some other snapshots from the celebration. It looks like the crew got Blake and Carson some cookies and a cake with gold decorations.

Carson’s wife, Siri, also flew out to Los Angeles to surprise him.

“Thank you to my @nbcthevoice family for celebrating my birthday & @blakeshelton’s yesterday at work,” Carson captioned the pictures. “Also to my wife @siriouslydelicious for shocking me by flying across the country for less than 24 hrs to spend it with me. Love you…Shout to our brand new coach @camila_cabello for immediately becoming family & crushing it on the show! Can’t wait for you all to see it in Sept! The talent is maybe the best I’ve ever seen so far…“

See the photos Carson shared below. We hope he and Blake had the happiest of birthdays!