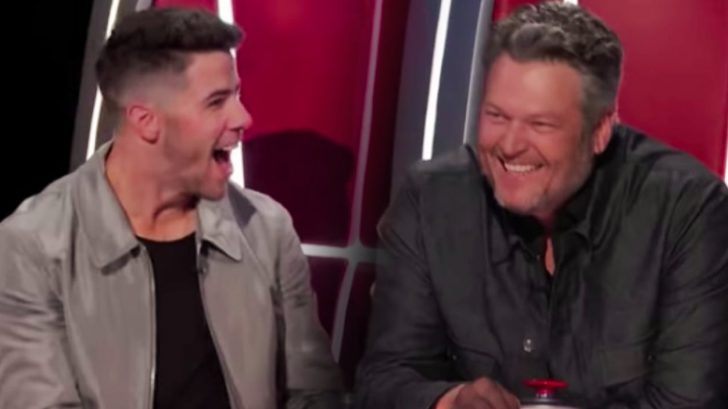 As Joei Fulco auditioned for Season 18 of The Voice, it originally seemed like she was going to be a no-chair turn. But as her performance progressed, it became obvious that two coaches were interested in claiming her for their teams.

Those two coaches were Blake Shelton and Nick Jonas. They turned within seconds of each other, with Shelton going first and Jonas soon following.

But even though two coaches turned, Fulco didn’t have to choose between them. Reason being? Shelton used his block on Jonas!

Joei… I’m glad you CHER’D your talent with us tonight! And I’m even more glad I was able to save you from @nickjonas… not all heroes wear capes… #voiceblinds

Shelton was intrigued by the young country rocker’s performance of Cher’s “Gypsys, Tramps, & Thieves,” so he wanted to make sure no one else got her. Since he felt pretty confident Jonas was the only other coach interested in turning his chair, he decided to use his block on him.

Once John Legend and Kelly Clarkson got the chance to see Fulco, they were blown away. Clarkson noted how her voice had a more seasoned sound than she ever expected from someone her age, and made a comparison between her and Chris Stapleton.

It was this old-school, weathered sound that drew Shelton to Fulco. “Joei, the Cher that’s in your voice, that’s what had me,” Shelton said. “The fact that you’re bringing that sound to current music is what’s gonna set you apart from everybody else.”

Jonas made it clear he was also a big fan of Fulco’s. “As you can see, I thought you were amazing,” he said. “But uh, my friend Blake over here decided to cut me off.”

You can watch the audition that helped Fulco earn her spot on Team Blake by tuning in to the video below. Jonas wanted her bad, and you can tell!