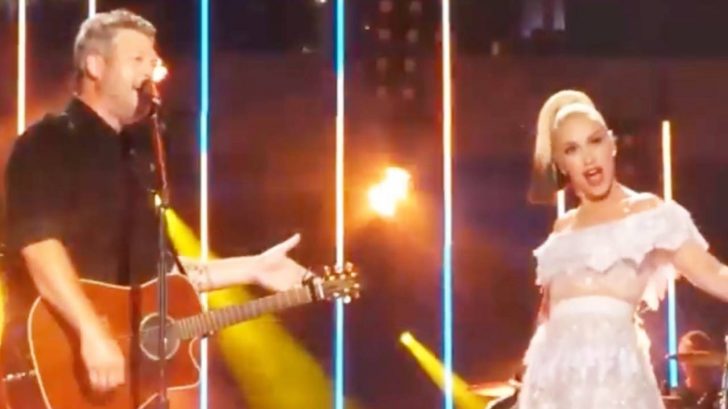 After previously botching her name at a rehearsal, Blake Shelton made sure not to make that mistake again when welcoming his new wife to the stage at CMA Summer Fest on Tuesday, July 27!

During Shelton’s set, he performed his #1 hit song “Happy Anywhere,” which happens to be a duet with his wife, Gwen Stefani, which they released before they were even engaged.

But while he was rehearsing for his festival appearances and upcoming Friends And Heroes Tour, he played a free show at his Oklahoma bar Ole Red and Gwen joined him. There, he introduced her as Gwen Stefani, but she teased him by saying, “I thought it was Gwen Shelton now.”

This was also a cute moment, Blake was gushing about Gwen Stefani being in tishomingo and she said, “I thought it was Gwen Shelton now”. They were both so cute! ?❤️ pic.twitter.com/Cl5QDUCfQ1

Luckily, at CMA Summer Fest, her remembered she wanted to be called Shelton now, so while they performed “Happy Anywhere,” he said to the crowd, “Gwen Stefani Shelton!” When he called her that, she completely melted…and so did we!

See their performance below.

And watch Blake introduce his wife as “Gwen Stefani Shelton” below.

Gwen Stefani Shelton.. the grin on his face after he said it ?❤️ pic.twitter.com/P93sETfFhC