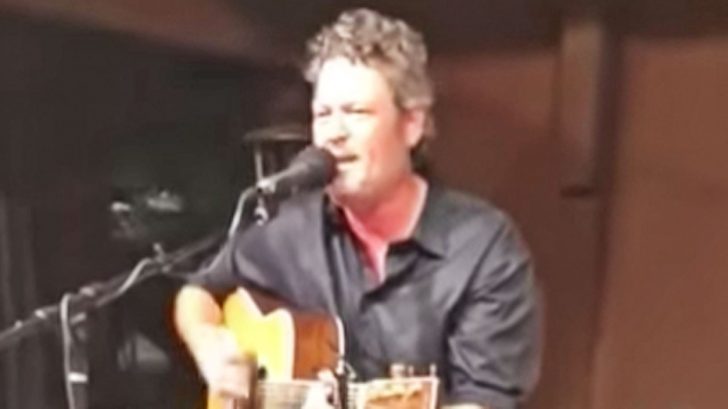 Gwen Stefani has always enjoyed the Instagram Story feature on the popular social media app. And thank goodness! Without her documenting her fun times with boyfriend Blake Shelton, we’d be in the dark about what they do all day!

Over the weekend, Shelton served as a groomsman at his friends wedding in Fort Worth, Texas, and brought along Stefani for all the festivities. The night before the big day, the couple of over two years attended the rehearsal dinner, which was followed by the entire bridal party going to a local bar.

Because of Stefani’s Instagram stories, she took us along for the ride!

After The Rehearsal Dinner Comes The After Party

From the rehearsal dinner, everyone jumped on a party bus to go to a small bar, which had a small outdoor patio filled with wooden picnic tables. Before they could go to the bar, though, Shelton had to get some cash out of the ATM, which of course, Stefani documented.

There was a country-singing musician providing entertainment on the outdoor bar patio, which Shelton, Stefani, and their friends really enjoyed. At one point, Shelton went up to him to chat for a bit and you can hear him say, “Maybe I’ll play one tonight,” and the musician said, “I would love that!”

A couple slides later, Shelton was on stage serenading his friends who were about to get married with his romantic hit “Honey Bee.” He continued singing his impromptu set with “Boys ‘Round Here,” and his 2007 single “The More I Drink.”

If Shelton hadn’t gotten his friends a wedding present yet, his surprise serenade would probably serve as a pretty good one. Watch Stefani’s entire Instagram Story from that fun-filled night below!