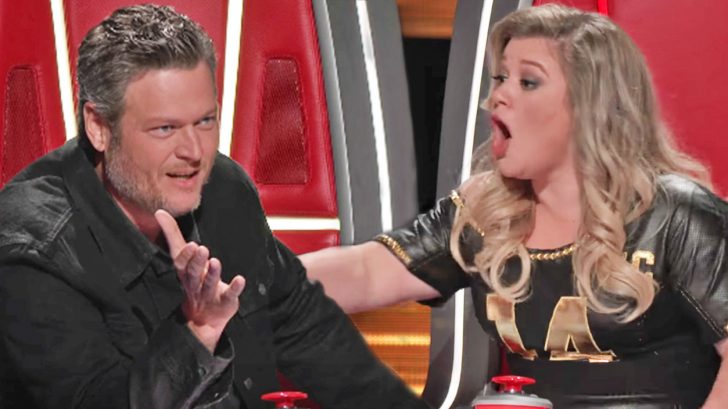 When 14th season of The Voice premiered, showing us all a brand new element of the show.

The Voice will be introduced a new game-changing rule to the Blind Auditions. Each coach will be able to use something called a block button, but only once during the first round of auditions.

Meet the new button on the block. ?

“In addition to the big, red button we all know, each coach’s chair has three new powerful buttons with the names of the other three coaches,” host Carson Daly explained to Yahoo! Entertainment. “These allow each coach to block another coach from getting an artist.”

Daly continued to explain how the new block button works by saying, “Let’s say Kelly hears a voice that she really wants, but she doesn’t want Blake to get that artist. She will just hit her Block Blake button. It both turns Kelly’s chair and blocks Blake from getting that artist. The thing is, Blake won’t know that he’s blocked until he hits his big button and turns his chair around to see [the words, ‘Blocked’ in front of him].”

The first time we see the block button in action is during 17-year-old Britton Buchanan’s Blind Audition, which was leaked on The Voice‘s YouTube channel a few days before Season 14 premiered.

Performing Ray LaMontagne’s “Trouble,” the teenager immediately won over Blake Shelton, who coyly looked over at his fellow coach – and sometimes nemesis – Adam Levine to see just how interested he looked. Once Alicia Keys turned for the singer, Blake knew he had his opportunity to block Adam without the Maroon 5 frontman knowing it was him.

After Adam turned around, he was so mesmerized by Britton’s performance, he didn’t even notice he was blocked – even though “BLOCKED” was written in big red letters in front of him. The cameras cut back to Shelton who looked extremely pleased with what he just did.

Who will be the first Coach to hit that block button? ?

Who will be the first Coach to hit that block button? ?

Britton sang the final note and Adam stood to give him a standing ovation, which is when Alicia pointed out that he’d been blocked, making him extremely disappointed. He correctly assumed Blake was behind this, but the “I’ll Name The Dogs Singer” denied this until the very end.

Adam campaigned for Britton to join Alicia’s team, but Blake put up a good fight, with Britton even complimenting his debut song “Austin.” He ultimately ended up choosing Keys, and was the runner-up, losing to Team Kelly’s Brynn Cartelli.