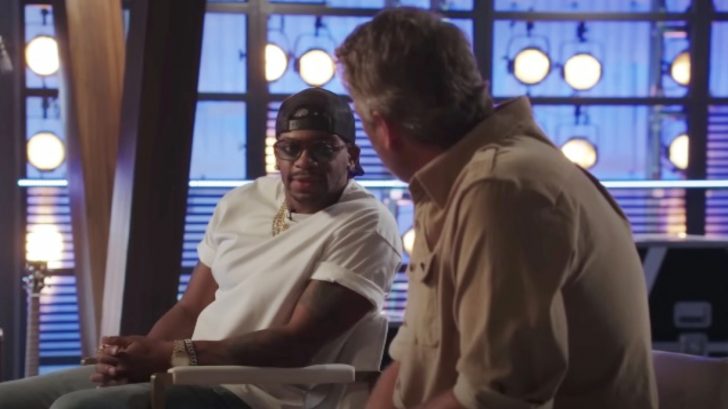 Jimmie Allen is one of country music’s fastest rising stars. He already has three number one singles: “Best Shot,” “Make Me Want To,” and “Freedom Was a Highway.” Allen recorded the latter song with Brad Paisley, who he toured with in 2021.

Also in 2021, Allen competed on Dancing with the Stars, and earned seventh place. He then went on to win New Artist of the Year at the 2021 CMA Awards.

This year, Allen is going to join Carrie Underwood on her Denim & Rhinestones Tour, which continues into 2023. Also this year, Allen served as a mentor on American Idol. And now, he’s Blake Shelton‘s team advisor on The Voice!

Each voice coach brings in another artist to help their team during the battles. Shelton brought in Allen for Season 22, and loved working with him.

Shelton spoke about Allen’s accomplishments in a behind-the-scenes video, saying, “Jimmie couldn’t be hotter right now. He’s starting to hit his stride as a major hitmaker in country music.”

The video also shows a clip of Shelton and Allen hanging out in the rehearsal room. Shelton asked Allen if he’s ever auditioned for a show like The Voice before.

“Yeah I’ve tried out for The Voice twice,” he said.

“What’d they tell you?” Shelton asked

Allen had a surprising response. He said they told him no!

Shelton’s reaction was priceless. He couldn’t believe that The Voice turned Allen away not once, but twice!

Allen isn’t the only country star who’s been rejected by The Voice. Maren Morris and Luke Combs both auditioned for the show, and they were also told “no.”

Head below to watch Allen talk about his Voice rejections. Everything ended up working out for him in the end!