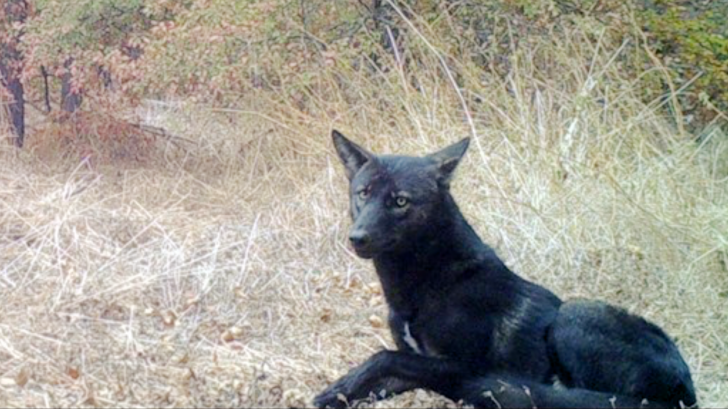 Animal Center officers in Austin, Texas, are celebrating after they located a coyote they had been searching for over the course of three months. The reason for the celebration is because this coyote is unlike almost any other…it’s pure black.

After receiving reports that a black coyote was in the area, the Austin Animal Center installed cameras in the hopes they’d catch the critter on film. Just when it seemed like the coyote was never going to show up again, it was captured on one of the cameras, and in broad daylight at that!

The Austin Animal Center said that the black coyote was seen with five other coyotes with regularly colored coats. The Center explained that the black coyote’s uncommon color “is thought to come from hybridization somewhere along the way with domestic dogs, but nobody knows how or why it arises. ”

The officers at the Animal Center said they will continue to monitor the coyote’s activity. And it’s understandable why they’d want to do so, he’s beautiful.

“…we just really love to see his gorgeous face!” read the post.

But as handsome as the black coyote is, the Animal Center officers say that admirers shouldn’t get too close to him if they see him out and about.

“…if you see a coyote during the day, remember to haze it! It’s important for them to learn that coming out during the day is scary, and they should stick to hunting at night. We can share space with coyotes, but not time!” read the post.

The Animal Center said that in order to keep the coyote safe, they will not be disclosing the coyote’s exact location. “...and if you know the location, please do not comment with it,” the post read.

You can see the full post below, along with some more photos of the coyote.

Just in time for Halloween, we have a spooky sighting to share– a black coyote!Our Wildlife Officers started receiving…

Have you ever seen a black coyote before?

Another black coyote was previously spotted in Hendersonville, North Carolina in 2016. It was captured on a trail cam, and the footage was shared on YouTube. You can watch that video below.

Such a beautiful animal!