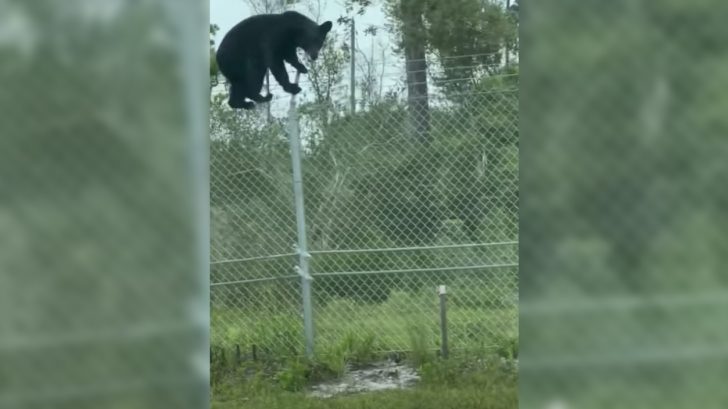 Kevin Dalrymple said he was driving around the base on Wednesday doing a routine patrol when he spotted the apex predator carefully maneuvering over the barbed wire so that it could get to the wilderness on the other side.

He whipped out his camera and filmed the bear that had somehow got onto the inside of the military base and was trying to get back on the other side and leave before getting approached. Kevin filmed the bear and it carefully places its paws in the right spot to not get hurt by the barbed wire spikes.

“He went over that fence like an Olympian,” Kevin told FOX 35 News.

Once he got to the other side, he dropped to the ground and took off running back into the bushes. Kevin says this specific bear is part of a group of bears that often wander onto the base.

“The base is a protected area for them, so they’re quite tame,” he added.

Tyndall Air Force Base officials say that the base has a total of 26,000 acres that are uninhabited natural land and it’s also home to a large population of Florida’s black bears.

Wildlife experts in the state say that there are an estimated 5,000 black bears that live in Florida and the Tyndall Air Force Base is guarded and protected so it’s a safe place for the animals to roam.

Watch Footage Of The Bear Climbing The Fence Below