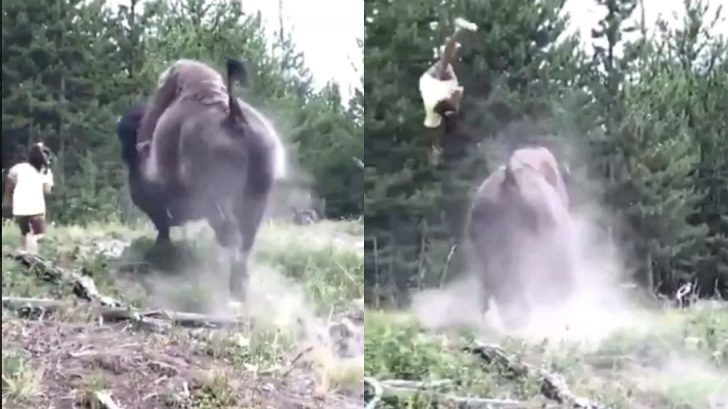 Vacation season is in full swing, which means America’s national parks are packed with tourists. One 9-year-old tourist from Florida got more than she bargained for as her family was visiting the Old Faithful Geyser area of Yellowstone National Park on Monday (July 22).

According to witnesses, a group of approximately 50 people gathered near a bull bison where they stayed for at least 20 minutes. Eventually, the bison had enough and charged the group, sending the young girl into the air as her family and others ran away from the angry bull.

The horrifying incident was captured on video by a fellow tourist who posted it on Twitter.

The Twitter user, Hailey Dayton, claims the family was petting the animal and invading its “personal space” before it charged.

“This is what happens when you f*** with wildlife and pay no mind to an animal’s personal space,” Dayton wrote.

The video was viewed millions of times before Dayton pulled it due to a large number of hurtful and inappropriate comments.

Signs posted in the park and on the park’s website state that the animals are wild and require space. Visitors are discouraged from interacting with the wildlife.

“When an animal is near a trail, boardwalk, parking lot, or in a developed area, give it space. Stay 75ft away from all large animals – bison, elk, bighorn sheep, deer, moose, and coyotes and at least 300ft away from bears and wolves,” the website states. “If need be, turn around and go the other way to avoid interacting with a wild animal in close proximity.”

Yellowstone National Park said the incident is under investigation.

Watch the horrifying incident unfold in the video below.