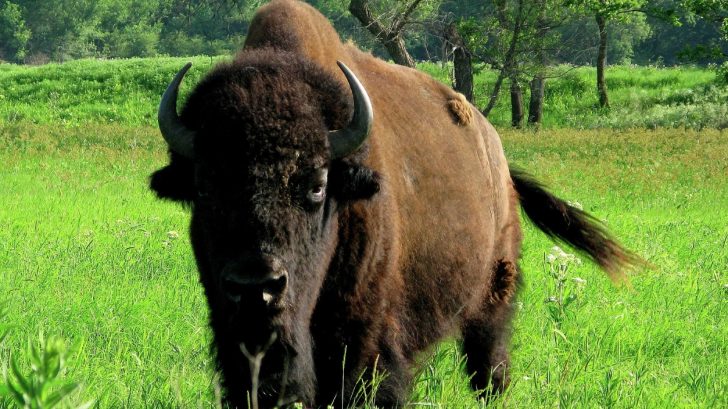 Discovering wild animals in a Safari drive-thru can be an amazing experience, especially with kids. It is meant to be a safe experience if visitors respect all the safety rules. Yet, an encounter can quickly happen by accident!

After several unfortunate bison encounters in Yellowstone National Park, it is in Chittenango, N.Y. that a bison headbutted a kid at the drive-thru zoo.

In footage filmed by a woman who took her grandchild to the Wild Safari drive-thru in N.Y., three cars are in the line driving on the road with a bison walking between them. As the first car drove away, the bison walked calmly to the next car to get closer. A child was hanging out of the back window watching the bison coming to him fearlessly. The bison stood in front of the child’s window and headbutted him pretty strongly. The kid sank back into the car.

The entire incident was viewed more than 16,700 times on Twitter.

According to WTVH’s Michael Benny, the park’s owner commented on the incident.

“Owner is aware of this. Says the bison in the video is not part of the safari drive thru anymore. Owner has no interest in shaming the adult driver of the car but says hanging out of window is strictly prohibited. Occupants get safety warnings throughout experience, he says.” Michael Benny wrote on Twitter.

Fortunately, the child was not injured. A simple piece of advice to help avoid children getting headbutted if you decide to take them on a Safari drive-thru experience: check that your back windows are well closed!

CHECK-OUT FOOTAGE OF THE INCIDENT BELOW

Woman who took her grandschild to The Wild Safari drive thru in Chittenango May 29 says she saw this a car ahead of her.
Safari had been sued by Town of Sullivan for operating w/o proper permits and claims of at least one incident involving “ramming” of a car w/ children in it. pic.twitter.com/B9fjsiHUKc