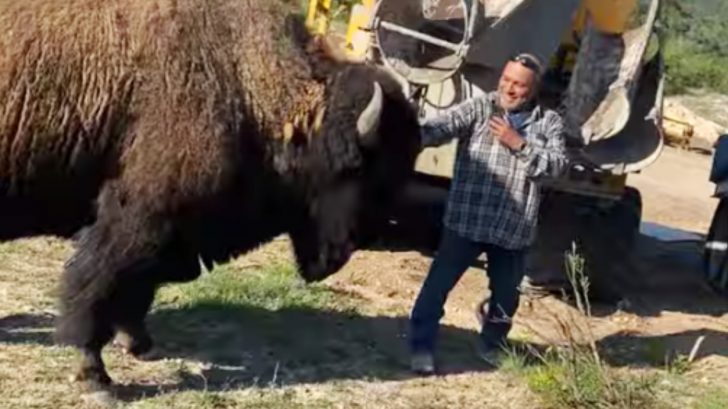 A power lineman was working near a bison and learned the hard way why experts tell the people to stay 25 yards away from large wildlife.

The video showed a couple of men standing outside their truck at a ranch while they were in the process of putting up powerlines. A bison that lived at the ranch walked up to one of them and the man cautiously began to pet the animal while the other one filmed it.

As he was filming, he walked up to the bison and reached his hand out to pet it on the head. However, the bison moved and shook its head as if it was telling the man it didn’t want to be pet.

The man, not understanding the message, continues to pet the bison and steps even closer to rub its head. At this point, the bison has had enough and does a very small, but powerful headbutt to the man’s side. He and the camera both went flying to the ground.

The guy who filmed the video said, “We build power lines and this was on a ranch where there was a bunch of bison. A coworker and I decided to try and pet one. He didn’t seem to mind until I walked up and tried to pet him. Well needless to say he knocked me down and gave me a scare of a lifetime.”

Check Out The Video Footage Below