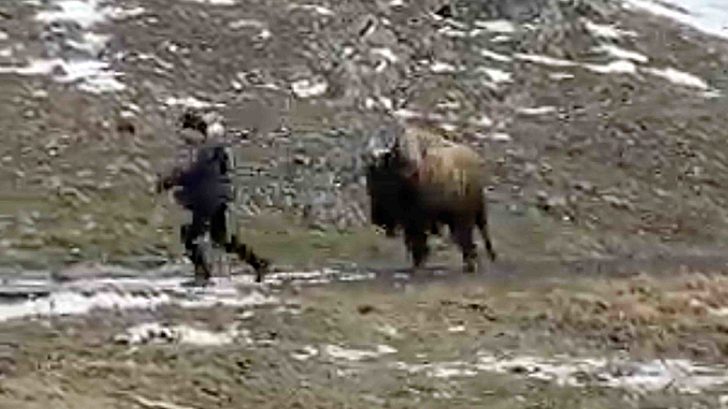 Sean Swetter from Clifford, Pennsylvania was visiting Yellowstone National Park on Thursday (April 21) when he filmed a tourist almost getting trampled by an angry bison.

In the bison’s defense, the tourist walked straight upto the wild animal from behind, which most likely startled the beast and made it very angry that it was being pursued.

Sean, watching the not-so-smart individual attempting to do what all park rangers instruct people not to do, pulls out his phone and starts filming the guy approaching it on a snowy pathway.

The large bison finally had enough of the man creeping up on it and turns around to charge at him. Stumbling, the man turns away and takes off running! Fortunately for this tourist, the bison stopped its charge and the man was able to run away to safety.

Sean said the incident happened less than one week after the opening of the park’s west gate near Cody, Wyoming. Rob Wallace, who oversaw the National Park Service and U.S. Fish and Wildlife Service from 2018 to 2021, said it still blows his mind that people don’t follow the rules and many times end up getting hurt.

Even with the numerous warnings from rangers, as well as signs posted everywhere around the park, on top of the many stories of people getting gored, trampled, and killed, some tourists are still not getting the message.

“What’s astounding to me is all of the social media attention given to people that get themselves in trouble with wildlife and it still continues,” Rob said, according to Cowboy State Daily. “These people have become a meme in a very unflattering way.”

Wild animals in Yellowstone, or anywhere else, should never be approached up close and in their personal space. The rules specifically for Yellowstone state that visitors should stay at least 25 yards away from all wild bison and you’re about to see why in the video below.

Watch Footage Of The Bison Encounter Below