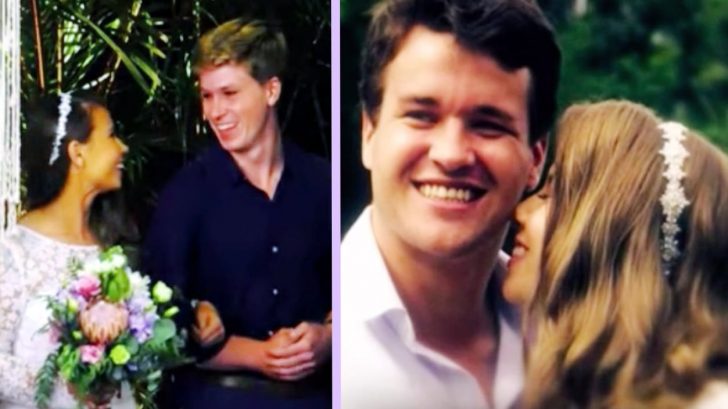 On March 25, Bindi Irwin and Chandler Powell said “I do” while standing in the lush, beautiful gardens of her family’s Australia Zoo. The couple originally planned to wed on April 4, but changed their plans at the last minute due to the COVID-19 pandemic.

Looking out for the safety of the 200 guests they planned to invite to their wedding, Bindi and Chandler chose to cancel their plans and host an intimate ceremony instead. The only guests were Bindi’s mother, Terri, her brother, Robert, and Wes Mannion, the best friend of her late father, Steve.

Bindi and Chandler announced their union through posts on social media, and also shared a wedding photo.

“We held a small ceremony and I married my best friend,” Bindi wrote. “There are no words to describe the amount of love and light in my heart right now.”

The couple has since shared additional details about their nuptials with People.

They also gave a few exclusive photos to the magazine, which you can see below.

When Bindi Irwin was planning her wedding to longtime boyfriend Chandler Powell, she knew she wanted to make her late father Steve Irwin a big part of the ceremony. ❤️ Tap the link in our bio for how the newlyweds honored him during their beautiful wedding ceremony. ✨|?: @australiazoo

Bindi Irwin’s intimate wedding ceremony was all about family — even down to the dress! ? The Animal Planet star wed longtime boyfriend Chandler Powell in a long-sleeve gown, inspired by the one her mom Terri wore to marry Bindi’s late father, Crocodile Hunter star Steve Irwin. ❤️ Tap the bio link for more on her custom sunflower lace wedding gown. | ?: @australiazoo

From the day Bindi Irwin got engaged to fiancé Chandler Powell, the Animal Planet star has been planning her dream wedding at the Australia Zoo. ❤️ And although the couple had to dramatically alter their plans due to the coronavirus pandemic, they exchanged “I dos” in an intimate ceremony: “Even if it wasn’t by-the-book perfect, it was our perfect.” ? Tap the bio link for more on the couple's "whirlwind" ceremony. ✨ | ?: @australiazoo

In addition to being photographed, Bindi and Chandler’s wedding was also filmed for an upcoming special on Animal Planet. The TV channel announced the pending special through a video preview on its social media profiles.

The special, called Crikey! It’s The Irwins: Bindi’s Wedding, will air on April 18 at 8 PM EST. Based on the preview Animal Planet shared, we have a feeling we’ll need a full box of tissues at hand when we tune in to watch.

Animal Planet’s preview clip shows a few never-before-seen parts of Bindi’s wedding, including the moment Robert walked her down the aisle. We also get the chance to hear from Terri, who says Steve “would be proud” and she’s “pretty sure he’d be crying.”

You’re sure to tear up just while watching the 30-second preview of Bindi’s wedding special below.

Congratulations to Bindi and Chandler on their marriage. We wish them many years of love and happiness together.

See Bindi and Chandler's Magical Wedding | Crikey! It's the Irwins

"I know that Steve would be proud, and pretty sure that he'd be crying." ❤️YOU'RE INVITED to Bindi and Chandler's unforgettable wedding at the Australia Zoo. Crikey! It's the Irwins: Bindi's Wedding will air on Saturday, April 18th at 8/7c on Animal Planet! #TheIrwinsLearn more about their love story here: Discovery.com/BindiChandlerWedding