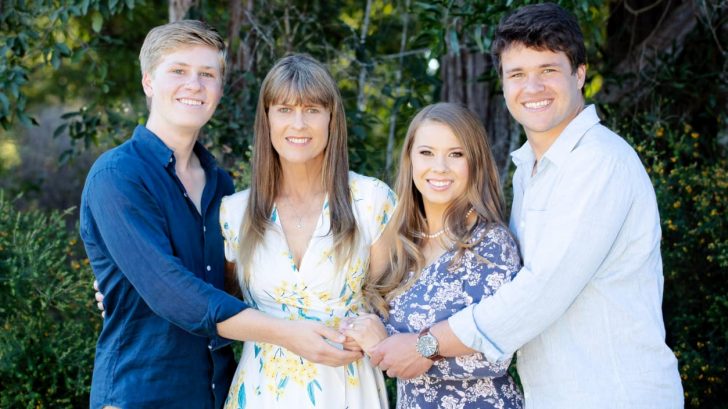 Bindi Irwin celebrated her 21st birthday on July 24, 2019 and her longtime love Chandler Powell surprised her with a stunning gift…an engagement ring!

While surrounded by animals at Bindi’s favorite spot in the Australia Zoo, Chandler got down on one knee and asked her to marry him. The moment was captured by Bindi’s then-15-year-old brother Robert, who is a photographer.

He caught some gorgeous pictures from the moment Chandler asked Bindi to be his wife.

Of course, Chandler conspired with Robert to plan that part of the proposal. The young wildlife photographer and his mother, Terri, both knew about Chandler’s proposal plans in advance.

Traditionally, when a man wants to marry a woman he asks her father for her hand in marriage. Sadly, Bindi’s father, famed TV personality and conservationist Steve Irwin, passed away in 2006.

So instead, Steve went to Robert and Terri to ask them for permission to marry Bindi.

Since Chandler had dated Bindi for six years, the Irwins already viewed him as a member of the family. So it came as no surprise that Terri and Robert gave him their blessing to marry her.

During an interview with ET after the proposal, Chandler shared how he went about asking the Irwins for Bindi’s hand in marriage:

“I asked them, ‘You know, I really love Bindi, she is the girl of my dreams and I am so blessed to spend my life with her, and I really want to ask you guys permission to marry Bindi.'”

And their response was heartwarming:

“Immediately, they were so supportive, they gave me the biggest hug and said welcome to the family, and it was really, really special,” Chandler recalled.

As for what Steve would think of Chandler, Terri fully believes he would approve. In a post she made to Twitter shortly after the proposal, she wrote that Steve would be “so very happy.”

During an interview with ET a few months before Chandler and Bindi got engaged, Terri shared how she thinks Steve would have interacted with Chandler. “I think your dad would have tested him morning, noon, and night, and then approved, because your dad was always like that,” she said with a smile.

You can watch that interview in the clip below.

Chandler and Bindi were married in March 2020. We wish them many years of love and happiness together!