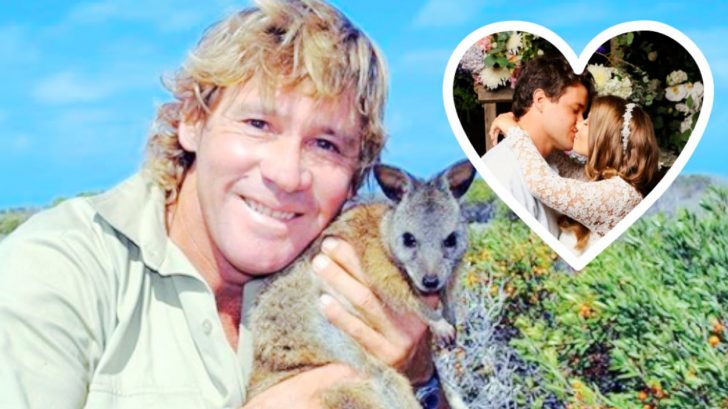 After Bindi Iriwn and her longtime love, Chandler Powell, got engaged, they dove right in to planning their wedding for April 4, 2020. Little did they know a global pandemic would occur just as they were preparing to say “I do,” leading them to make a difficult decision.

Instead of marrying on April 4 as originally planned, Bindi and Chandler tied the knot during an intimate ceremony at Australia Zoo on March 25. And instead of having the 200 guests the couple planned to host, the only guests in attendance were Bindi’s mother, Terri, her brother, Robert, and Wes Mannion, the best friend of Bindi’s late father, “Crocodile Hunter” Steve Irwin.

Bindi announced her marriage with a post on social media:

“Today we celebrated life and revelled in every beautiful moment we shared together in our Australia Zoo gardens. Mum helped me get ready, Robert walked me down the aisle, Chandler became my husband and together we lit a candle in Dad’s memory.”

In addition to holding a candle-lighting ceremony at their wedding, Bindi and Chandler honored Steve in other ways throughout the day.

Speaking to People, Bindi shared that her bridal bouquet was wrapped with a khaki ribbon as a way of paying homage to her father’s famous all-khaki ensemble.

“Most brides have something blue; I had my khaki,” she said.

Her mother, Terri, fully believes that if Steve was still with us, he would have worn khaki to Bindi’s wedding:

“I know Steve would have worn khaki to Bindi & Chandler’s wedding…” Terri wrote in an emotional post on Twitter. “I wish he could have been there to see the most special day in his daughter’s life. We miss him so much.”

Remembering @RobertIrwin’s first wedding. I love that Steve and Robert both wore khaki. I know Steve would have worn khaki to Bindi & Chandler’s wedding, too. I wish he could have been there to see the most special day in his daughter’s life. We miss him so much. pic.twitter.com/ulCNYzZzIL

Even though Steve couldn’t be there for Bindi’s wedding, his presence was felt throughout the day.

Beyond wrapping her bouquet with a khaki ribbon, Bindi also honored her dad by placing a photo of him and his dog, Sui, next to the altar where she and Chandler said their vows. Her choice to pick a photo of Steve with Sui is especially meaningful, since Bindi’s middle name is “Sue” in honor of the pup.

Bindi told People she and Chandler placed the photo of Steve and Sui on an easel, and it was right next to her mom and Robert during the ceremony:

“So mom and Robert were standing right next to dad as we exchanged vows,” she said. “We had a candle-lighting ceremony for him, and it really felt like he was there with us. It was a lovely moment of peace and happiness.”

The location the couple chose for their ceremony also honored Steve. They were married in the Australia Zoo gardens, an area of the zoo that meant a great deal to Steve.

“It’s a beautiful little area where he had filmed for many years,” Bindi said. “It felt really wonderful and just meant to be.”

When Bindi Irwin was planning her wedding to longtime boyfriend Chandler Powell, she knew she wanted to make her late father Steve Irwin a big part of the ceremony. ❤️ Tap the link in our bio for how the newlyweds honored him during their beautiful wedding ceremony. ✨|?: @australiazoo

Bindi even honored her father through her wedding dress. A separate People article details how she chose the dress because it resembled the one Terri wore when she married Steve in 1992.

But the sunflower pattern on the sleeves of Bindi’s dress also have a connection to her father.

“When we would go on projects and drives together, we’d often drive through these huge sunflower fields in the middle of nowhere and we always stopped to take them in,” she said.

As for who walked Bindi down the aisle, that honor went to Robert. We’re sure Steve would be so proud of them both.

You can learn more about Bindi’s stunning wedding by watching the video below. We wish her and Chandler many years of love and happiness together!