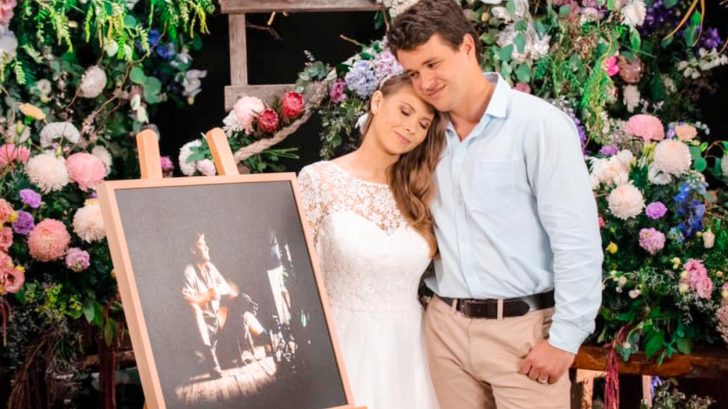 On Bindi Irwin’s 21st birthday – July 24, 2019 – she said “yes” to a marriage proposal from her boyfriend of several years, Chandler Powell.

https://countrymusicfamily.com/bindi-irwin-shar…wedding-ceremony/Since that day, the only daughter of the late Steve Irwin has been planning every detail to her wedding.

A few days after the engagement, she spoke with Entertainment Tonight and revealed how she would be honoring her father, who died when she was just eight years old. She said her younger brother, Robert, would be walking her down the aisle in their father’s place. She believes that’s exactly what Steve would have wanted:

“I’m always so grateful that Robert is there, and he has been such a big part of my life and he’s always stepped up and been the one to give me a hug when I need it and encourage me forward in life,” Bindi said. “So he will definitely be the one to walk me down the aisle when the time comes, and I think that will make it really special.”

All ssssssmiles with beautiful Jenny. This sweetheart has been part of our lives since I can remember. She’s the most calm and lovely Burmese python you’ll ever meet. ?

One month before their wedding date, COVID-19 began spreading all over the world.

“We had been planning for almost a year,” Bindi told PEOPLE for their latest issue. “As soon as this all started happening, we had to look at different options to make sure everyone was safe.”

Just a few days before the wedding were to take place, Bindi and Chandler essentially “cancelled” their wedding to anyone who didn’t live with them at the Australia Zoo.

Bindi told the magazine, “We thought about postponing, because you want to share this day with everyone, but when it boiled down to it, we both just said, ‘Look, we desperately want to get married, and no matter what the future holds, at least we’ll be husband and wife. We can take on the world together.'”

The two were married on March 25, 2020 and announced it later that day on social media.

Bindi wrote, “We held a small ceremony and I married my best friend. There are no words to describe the amount of love and light in my heart right now. We’ve planned this beautiful day for nearly a year and had to change everything, as we didn’t have guests at our wedding.”

They were saddened to not be able to share the day with Chandler’s family and the rest of their friends, but Bindi says, “It was a tough decision but absolutely the right one.” The only people in attendance were Bindi’s mom Terri – who helped the bride get ready – her brother Robert, and her father’s best friend Wes Mannion. Bindi also said they lit a candle in Steve’s memory during the ceremony.

Since their March wedding, Bindi, Chandler, and even Robert have shared a some photos from the special day.

Walking my sister down the aisle was one of the most special moments of my life ❤️ Bindi, you are the most amazing sister and friend, always there for me through it all and I just couldn’t be happier you found Chandler. And Chandler, I am so happy to now welcome you into our family as my brother. March 25 was a truly beautiful day!

I get to call this beautiful girl my wife now❤️ This was the most incredible day. We can’t wait to share it all with you on @animalplanet

6 years of friendship and loving you. One month of marriage. Here’s to dancing though life together. ❤️

In a post on May 19, 2020, Bindi shared even more photos from the wedding that we had never seen before, including another way her father Steve was honored during the ceremony. Along with lighting a candle, they had a portrait of him next to where they said “I do.”

Bindi posted a series of photos, writing, “Our wedding day. ❤️ Reflecting on these beautiful moments with the love of my life.”

See the series of photos Bindi shared below. Make sure to swipe through to see them all, including the sweet moment with Steve’s portrait.

Our wedding day. ❤️ Reflecting on these beautiful moments with the love of my life.