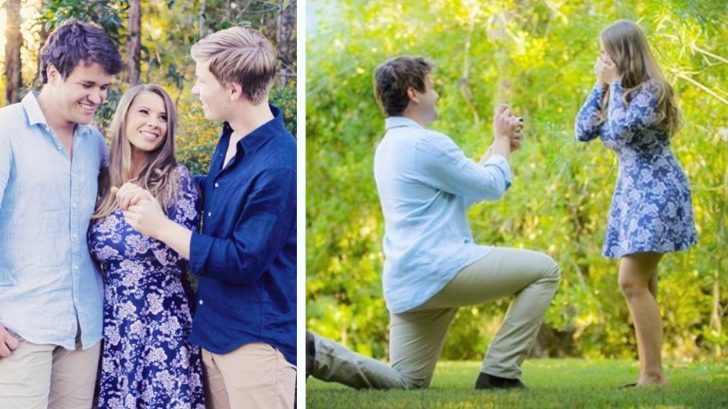 Wednesday (July 24) was a special day for Bindi Irwin. Not only was it her 21st birthday, but it was the day she got engaged to the love of her life!

Taking to Instagram, Bindi revealed that she had just said “yes” to her longtime love Chandler Powell, who she met six years ago at her family’s Australia Zoo.

Bindi’s family expressed their joy on social media, with her mother, Terri, writing that it was the “best day ever!”

She also spoke about Bindi’s late father, TV personality and conservationist Steve Irwin, saying that Steve would have been “so very happy” about Bindi’s engagement.

Best day ever! Chandler asked and beautiful @BindiIrwin said yes. I am so very happy, and I know Steve would be too. Congratulations!! pic.twitter.com/sN5sFnxZhI

Bindi’s 15-year-old brother, Robert, also expressed his happiness on social media. The proud brother took to Instagram to share a couple photos from that special day, along with a sweet message.

“I am beyond happy for you two,” he wrote. “You are true soulmates and have always been so completely perfect for each other.”

I am beyond happy for you two. You are true soulmates and have always been so completely perfect for each other. Love you both and congratulations ?

But Robert wasn’t just there to celebrate with his sister and her new fiancé after the proposal. He was actually there to witness the whole thing!

For those of you who don’t know, Robert is a skilled photographer. His detailed pictures of wildlife and natural scenes have earned him endless praise and his fair share of awards.

Happy #NaturePhotographyDay ? Capturing the beauty of this incredible natural world through photos has been my passion for years. Now I hope to encourage other young people to pick up a camera and get outdoors, it’s such a rewarding experience! ?: @rustypostcards

So it only made sense that Chandler enlisted Robert’s help to take photos of his proposal to Bindi. And the best part is, Bindi had no idea Robert was there!

In a followup post after her engagement, Bindi revealed her brother’s secret role as the photographer on her engagement day. She also shared a series of photos that show Chandler getting down on one knee to pop the question, and the look on Bindi’s face says it all.

The most beautiful surprise. Chandler and Robert worked together to capture the moment I said ‘YES’. We were in the gardens of Australia Zoo and it was beyond perfect. I never even knew Robert was there photographing and I’ll always be grateful to have these special memories of the most amazing day of my life. ❤️

“I never even knew Robert was there photographing and I’ll always be grateful to have these special memories of the most amazing day of my life,” Bindi wrote.

Robert shared some of the same photos on his own Instagram, and wrote about how happy he was to capture such an important day in his sister’s life.

“I’ve photographed some pretty cool stuff in my time… nothing comes close to this,” he wrote.

I’ve photographed some pretty cool stuff in my time… nothing comes close to this. I was so happy and thankful that @chandlerpowell asked me to secretively document the moment that @bindisueirwin said yes! One of the most special times ever ?

It only seems fitting that Robert was the one who photographed his sister’s engagement. After all, the two siblings are extremely close, as you can see in the video below.

A huge congratulations to Bindi and Chandler on their engagement!