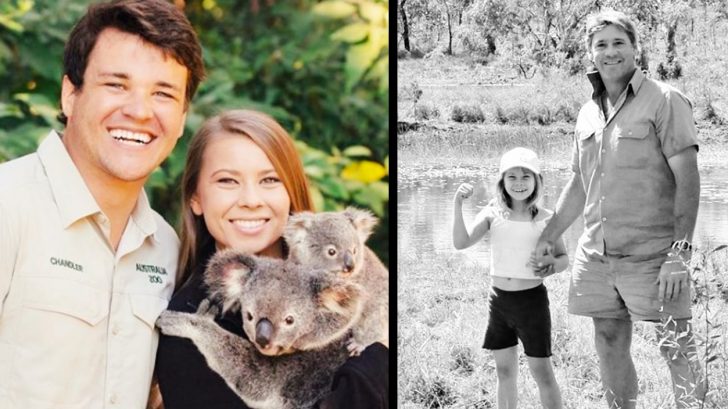 Bindi Irwin was just a little girl when her father, famed TV personality and conservationist Steve Irwin, passed away in 2006. Now, she and her 15-year-old brother Robert are continuing their father’s work by raising awareness for wildlife conservation and sharing their love of animals with the world.

A few years ago, Bindi met a young man named Chandler Powell who happened to love animals just as much as she did. The two of them quickly bonded over their shared love of wildlife and nature.

They eventually fell in love, and have been inseparable ever since. So it came as no surprise when Chandler asked Bindi to marry him on her 21st birthday (July 24). Of course she said yes!

The most beautiful surprise. Chandler and Robert worked together to capture the moment I said ‘YES’. We were in the gardens of Australia Zoo and it was beyond perfect. I never even knew Robert was there photographing and I’ll always be grateful to have these special memories of the most amazing day of my life. ❤️

In an interview given after that happy day, Bindi shared that she already has a plan in mind to honor her father at her wedding. She said she will do so by having her brother Robert walk her down the aisle in Steve’s place.

“I think that for me, it’ll be really important that Robert walks me down the aisle,” Bindi said. “That’s something that I really want to do.”

She also revealed that she will be sharing the traditional father-daughter dance at the reception with her mother, Terri. “My mom and I are so close. She’s my pillar of strength in life and I love her beyond description,” she said.

Adding that extra flair to every family photo… ❤️

But Bindi isn’t waiting until the wedding to honor her father. She and Chandler are already keeping his legacy alive through their latest adventure as a newly engaged couple.

Over the past few days, Bindi, Chandler, Terri, and Robert have been on their annual “Croc Trip” at the Steve Irwin Wildlife Reserve in Far North Queensland. While on the trip, the Irwins, Chandler, and their team catch crocodiles and place tracking devices on them before releasing them back into the wild.

During a little bit of downtime one day, Bindi and Chandler stopped to take a photo of her stunning engagement ring, and did so in a way that perfectly honored her father. The couple placed their hands on top of a crocodile they just caught, showing how they share Steve’s passion for helping animals.

“Beginning our life together, saving wildlife and wild places,” Bindi captioned the photo. “We will always honour Dad’s legacy and continue his mission, especially his passion for protecting beautiful saltwater crocodiles.”

Beginning our life together, saving wildlife and wild places. We will always honour Dad’s legacy and continue his mission, especially his passion for protecting beautiful saltwater crocodiles. ❤️ #CrocTrip2019 #SteveIrwinWildlifeReserve

We have a feeling Steve would be so proud of both Bindi and Chandler.

You can learn more about the adorable, animal-loving couple by tuning in to the video below. It’s clear they’re perfect for each other!