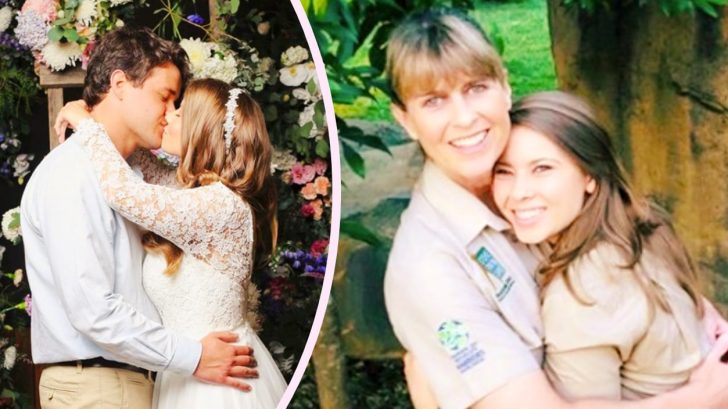 On March 25, 2020 Bindi Irwin and her longtime love Chandler Powell married during an intimate ceremony at Australia Zoo.

But that wasn’t how the couple planned for things to go. Their initial wedding date was set for April 4, 2020 and they were supposed to host 200 guests for their ceremony and reception.

Due to the COVID-19 pandemic, Bindi and Chandler made the difficult decision to cancel their original wedding plans and host a small ceremony instead. The only guests in attendance were Bindi’s mom, Terri, her brother, Robert, and Wes Mannion, the best friend of Bindi’s late father, Steve.

“We thought about postponing, because you want to share this day with everyone, but when it boiled down to it, we both just said, ‘Look, we desperately want to get married, and no matter what the future holds, at least we’ll be husband and wife. We can take on the world together,” Bindi told People.

Bindi and Chandler originally shared just one wedding photo, and used it to announce they were finally husband and wife.

Later, the newlyweds shared some additional wedding photos with People, and also spoke with the publication about their ceremony.

The pair mentioned the little ways they honored family throughout the day. For example, Bindi carried a bouquet wrapped with a khaki ribbon to honor Steve’s love of khaki. The couple also had a picture of Steve with his dog, Sui, next to them while they married.

“So mom and Robert were standing right next to dad as we exchanged vows,” Bindi told People. “We had a candle-lighting ceremony for him, and it really felt like he was there with us. It was a lovely moment of peace and happiness.”

Bindi Irwin’s intimate wedding ceremony was all about family — even down to the dress! ? The Animal Planet star wed longtime boyfriend Chandler Powell in a long-sleeve gown, inspired by the one her mom Terri wore to marry Bindi’s late father, Crocodile Hunter star Steve Irwin. ❤️ Tap the bio link for more on her custom sunflower lace wedding gown. | ?: @australiazoo

Bindi also honored Terri at the wedding, and did so through the gown she chose to wear.

Speaking to People, Bindi said she picked her wedding dress because it reminded her so much of the one Terri wore when she married Steve in 1992. If you have ever seen photos of Terri’s wedding dress before, then you know it also had long, lace sleeves with a floral design just like Bindi’s.

Bindi recalls loving her mom’s wedding gown from a young age. “I wanted something very similar because I’ve admired [my mom’s] dress since I was tiny, “When I was about 12 years old, I put on mum’s wedding dress and it was a really, really special…“

Celebrating Mama’s engagement anniversary. My best friend and a beautiful light in this world.?

Terri’s dress has been in the family for over 50 years, and because of that, it was too old for Bindi to alter and wear herself. So she went searching for a dress of her own in the same style.

She found just the dress, one she says perfectly “mimicked” Terri’s. Bindi also noted how the sunflower pattern on the sleeves reminds her of Steve as well.

“When we would go on projects and drives together, we’d often drive through these huge sunflower fields in the middle of nowhere and we always stopped to take them in,” she said.

We’re so glad Bindi was able to find her dream dress, and she looked beautiful in it! See more photos of her gown here and in the video below.

Congratulations to Bindi and Chandler on their marriage! We wish them many years of love and happiness together.