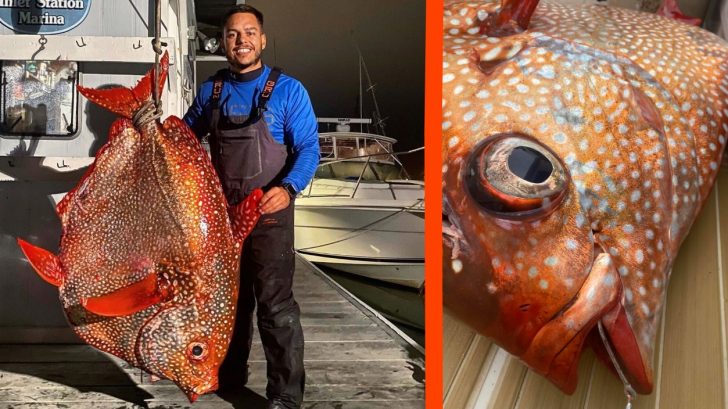 Jon Wetherington, Michael MacTaggart, and Nick Kemp from Hampton, Virginia headed down to Virginia Beach to go fishing and charter a boat.

The guys were hoping to catch a swordfish and decided to head out about 80 miles off the Virginia Beach coast near the Norfolk Canyon. They spent hours there casting their lines until it had got dark and they were about to give up hope for the day.

Right before they decided to head back, they floated over an area in the water where it goes from 300ft deep to 6000ft deep. All of a sudden, they felt a tug on the line. All three men took turns hand-cranking the rod, fighting the fish every inch of the way until it was reeled to the surface.

“We start seeing way down this silver color basically,” Michael told WAVY. “It was definitely a surreal moment for all of us.”

“They start yelling ‘opah’ and I think ‘what are these clowns talking about,'” Jon jokingly added.

Opah is a deep-ocean fish that are typically found in tropical or temperate waters and they also are the only known fish that is fully warm-blooded. This one took the guys 45 minutes to get into the boat and they took it to the Rudee’s Inlet Marina where it weighed in at a staggering 143 pounds.

“Pending 143lb Opah Virginia State record I hand cranked offshore of VA at Norfolk Canyon,” Michael wrote on Instagram. “This is the first opah caught recreationally from our area of Hampton Roads!”

While they are waiting to hear back from officials that this is officially a record catch, Michael did an interview with Wavy 10 and you can watch that interview below.