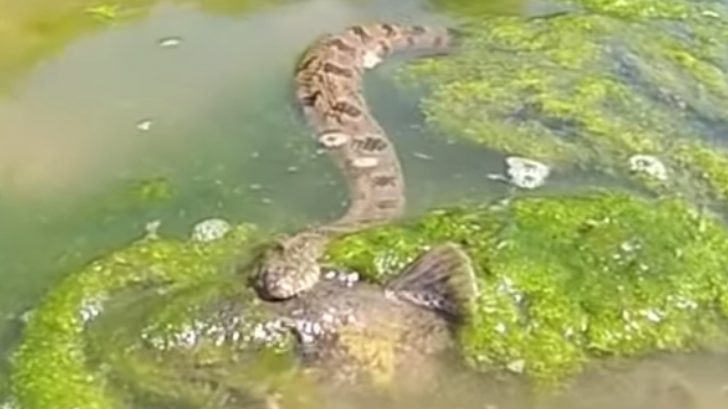 Bruce Burns was down by the river with a group of friends when he spotted and filmed a non-venomous water snake doing battle with a fish bigger than it was.

Bruce Burns wrote on YouTube, “We came across this blotched water snake trying to eat a catfish much larger than he could possibly swallow on the bank of the Colorado River near Bastrop, Texas.”

The fascinating video showed that the water snake had the catfish laid up on the shoreline in the sun trying to kill it by keeping it out of the water. However, when people began to gather around it, the snake started pulling the fish back into the water.

“I wouldn’t get this close if…I know my snakes,” he told the others standing around watching and worried for his safety. “It’s not a poisonous snake, it’s a botched water snake. I don’t know why he thinks he’s going to eat that but, holy crap!”

Now that the catfish was in the water again and able to breathe, it found some strength to fight back and started flipping its tail around trying to break free.

The fish fought with all it had and even though it was much larger, it was completely exhausted and couldn’t manage to get away from the death grip the snake had on it.

The video lasts three minutes and fifty seconds until both the snake and fish sank down into the murky muddy water and disappeared.

Watch Snake vs. Catfish Video Below