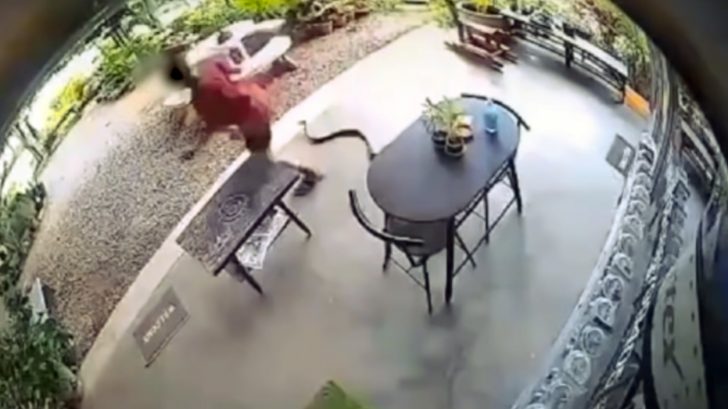 A big aggressive snake was captured on film trying to strike and chase after someone who had gotten a little too close to them while it was on the person’s patio.

According to NDTV, this took place in Thailand and was captured on camera by the home’s security cameras overlooking the patio. It appeared to be a nice day outside and the woman who was staying at the home walked over from the yard to the patio to prepare the table for a meal.

As she was organizing the items in their spots on the table, you can see a snake moving off to the right of the video and it was slithering beside the house. It must have been surprised by the lady because it aggressively stopped what it was doing and immediately struck at her.

“It seems like the moment the person turned was the moment that snake lunged. Like they both recognized each other,” one person wrote in the commments of the video.

Frightened by the intimidating animal, she jumps back and takes off running across the patio and into the yard. The snake was impressively fast and was right on her heels across the patio but when they got to the yard, the snake switched its direction and took off slithering towards the bushes.

“First time I see a snake move that fast holy cow that was fast,” another wrote.

Many who watched the video shared on Viral Hog’s YouTube channel pointed out how aggressive and hostile the snake was.

“Good for her. I didn’t realize that some of them snakes were so aggressive,” one wrote.

Watch Footage From The Snake Attack Below