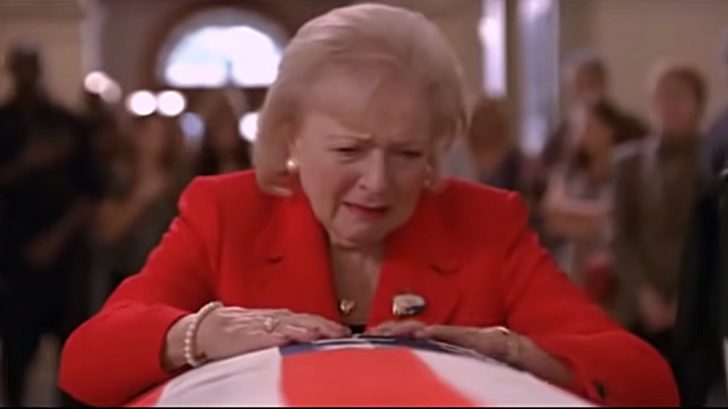 Betty White had the opportunity to fulfill one of her final career ambitions in 2010 when she was asked to be a part of the Hallmark Hall of Fame movie, The Lost Valentine.

In the movie, White plays Caroline, a devoted wife who visits a train station every Valentine’s Day because it was the last place she saw the husband who went missing in action during World War II. When a television reporter approaches Caroline about her story, she agrees and begins to share the touching love story she shared with her husband, as can be seen in flashback scenes.

The news reporter eventually works to have the missing Navy pilot located and brought home. The story of what happened to Caroline’s husband and the love story they shared unfolds. In the movie’s final scene, Betty White gave the performance of a lifetime as her character finally gets closure.

In an interview with CBS, Betty White shared that she almost didn’t take the role due to having prior obligations that wouldn’t allow her to go to Atlanta to film. But, after reading the script at the insistence of her agent, White found that she couldn’t turn down a role that would allow her to revisit her own beautiful love story.

“When I read the script, I was hooked. I had to do the movie,” White said. “It was such a beautiful love story. When you’ve had a love like that in your life, it’s an awful temptation to revisit it. My beloved Allen Ludden and I had a very special, special love, as do Neal and Caroline in the film.”

The role was out of character for White who was best known for her comedic talents, but it gave fans a chance to see the depth of her talent. “It was a challenge,” White said of stepping out of her acting comfort zone, “but it was a lovely opportunity to let your heart show a little bit.”

Betty White was married to game show host Allen Ludden from 1963 until he died in 1981 at the age of 63 from stomach cancer. She never remarried.

Watch the emotional closing scene of The Lost Valentine below.