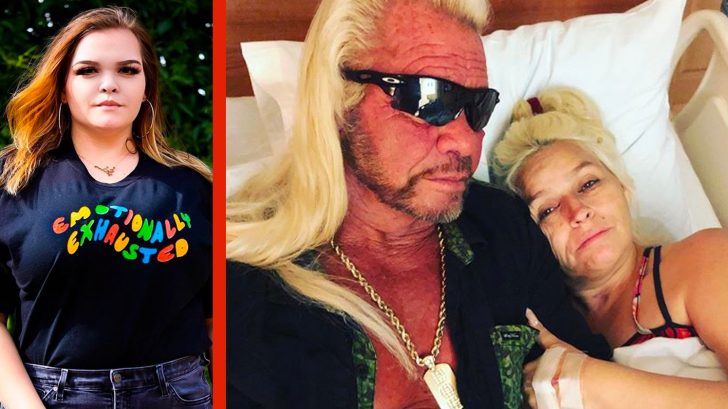 Just two months after the Chapman family lost their dear and beloved matriarch, Beth Chapman, her daughter is speaking out about her mom’s tragic final moments – and it paints a heartbreaking picture.

Speaking with SurvivorNet, the youngest daughter of Beth Chapman and her husband Dog The Bounty Hunter opened up about her own grief and her mother’s illness. SurvivorNet is a program for those impacted by cancer, helping connect people in a variety of ways.

Beth, who died on June 26, 2019, after a lengthy battle with throat cancer, was first placed into a medically-induced coma so that doctors could treat her properly as they were trying to save her life.

In a gut-wrenching few words, her daughter Bonnie Chapman shares the reality that the family faced when this unfolded and she was rushed to the emergency room.

“My mom was naked in the bathroom and told my dad to look at her. And he goes, ‘I am looking at you.’ And she goes, ‘No, look at me.’ And then she was standing there and she started gasping, and my sister came into the room and they called 911 immediately. And that was the last moment that we really saw her completely conscious.”

If you’d like to pay respects, feel free to. pic.twitter.com/fuOsOBm27Q

In Bonnie’s words, as her mother stood there gasping for air in the final moments any of her family would see her conscious, “she quite literally choked on her cancer” – referring to the serious effect the throat cancer had on her mom’s ability to breathe.

“…at the end of the day, she did not want to lose her hair, her teeth. She didn’t want to feel like she was falling apart. She wanted to remain as much ‘Beth’ as possible.”

“Even though when she did pass, she had lost the majority of her hair, she was really happy to still have her smile and still look like Beth,” Bonnie added.

Beth was honored during two separate celebrations of her life – one in Hawaii, and one in Colorado. The latter of which was attended by a huge crowd and had many speakers share their favorite memories of their beloved Beth.

Our thoughts and prayers are with this family in their time of great loss.