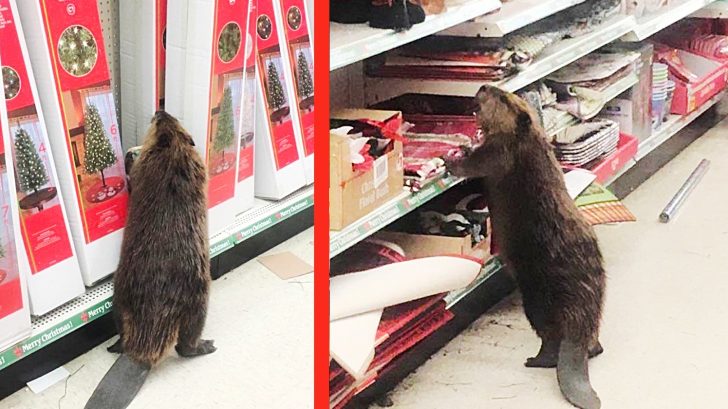 One angry beaver didn’t care for the selection of artificial Christmas trees at a local Dollar General – so he took things into his own hands.

Likely on the hunt for a tasty Douglas fir or a delicious poplar tree, this beaver was not impressed by the boxes of pre-lit holiday trees at this Dollar General in Charlotte Hall, Maryland.

Straight from a 2016 news report – this unique story has been coming up again in the news after getting a re-share from Mountain Mann Survival on Facebook and it’s too funny not to talk about!

A series of four or five photographs show the beaver rummaging through the holiday aisle in this Dollar General and leaving a path of complete destruction in his path.

Luckily, after the workers got in touch with animal control, the beaver was able to be captured and late released to a wildlife rehabilitation facility where he found a wonderful new home.

The beaver tweet may go viral! All joking aside, the beaver was safely rescued by animal control & was released to a wildlife rehabilitator. pic.twitter.com/0VyLXJPjxh

“We’ve received quite a few unique calls in the time I’ve been here, but never one about a beaver in a Dollar General store,” Stone added.

Check out the full news report below and let us know what you think was on this beaver’s holiday shopping list!